They say they've been living off food scraps in a nearby municipal bin, and it's actually been sustaining them. Nineteen-year-old Classmore Tsiga and his friends scavenge for food from the municipal skip. Photo: Bernard Chiguvare

Seven Zimbabwean teenagers have been living under a big tree near Shoprite in Louis Trichardt, Limpopo, for almost a year, scavenging for food from a nearby skip.

The boys, aged 15 to 19, sleep under the tree on one torn mattress, sharing two blankets. They wake up at 6am and pack their blankets and clothes into a big white bag and hang it in the tree for safety. When it rains they move to the verandah of the nearby shops at night.

During the day they go out looking for work and food, begging from passers-by or picking up leftover food thrown into the municipal skip nearby. They have no plates or pots and do not cook.

They bath once or twice a week at a nearby stream and use the public toilets nearby.

“This place is convenient for us because toilets are near, the big municipal bin where people throw away leftover food is here, and a lot of people pass through this place. Some of them donate clothes or food,” says 19-year-old Classmore Tsiga.

“This is our home but we also wish to be under a roof one day.”

Putting a brave face on it, Tsiga said, “This municipal bin is our soup kitchen. No one has fallen sick from eating leftover food from the bin. God is great.”

Explaining how he came to Louis Trichardt from Rusape in Zimbabwe, Tsiga said: “Life was very difficult at home. My unemployed parents could not afford school fees so I dropped out in Grade 5.

“My sister who left for Johannesburg in 2018 advised me to follow her. In Beitbridge I was mugged. They got away with R200 meant for transport from Beitbridge to Johannesburg. My sister, who is doing odd jobs, could no longer afford the transport cost,” he said.

He did odd jobs in Beitbridge and managed to save money to get as far as Louis Trichardt.

“My aim was to join my sister but it is taking time. I do not regularly get hired for work.”

Tsiga says he is good at baking.

“I wish there was someone who could hire me for baking because it’s my passion. I used to do it back home,” he says. 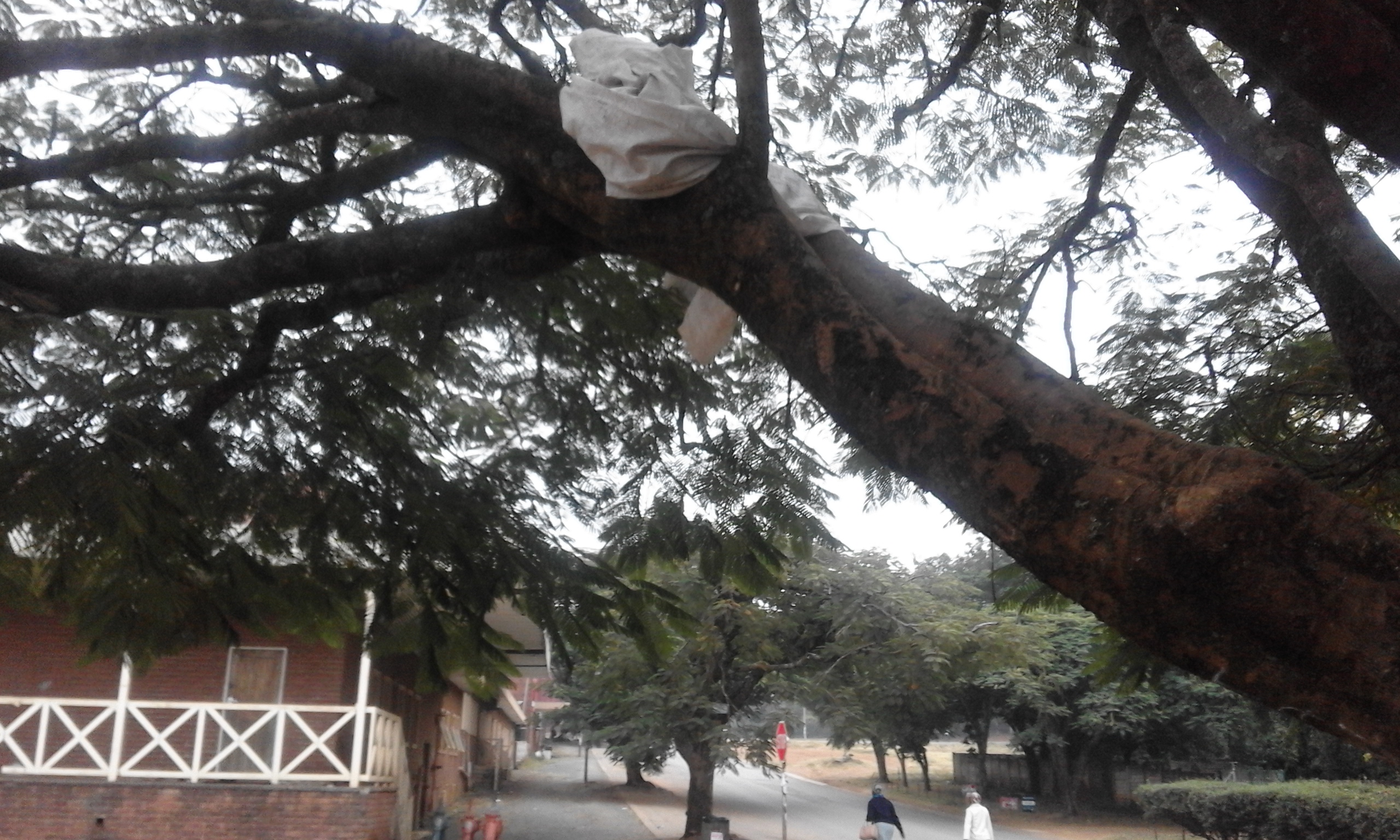 The teenagers store their few belongings in the tree. Photo: Bernard Chiguvare

Tapiwa Sibanda, 15, from Mwenezi says both his parents died when he was very young and he was sent to look after his grandfather’s cattle. He dropped out of school at the age of 9.

“My aim is to raise money for school fees then I can go back to school, but it seems impossible,” says Sibanda.

John Tambire,17, from Masvingo decided to come to South Africa so as not to be a burden on his grandmother after his mother remarried. He saved R200 from odd jobs in Zimbabwe which he used for transport to Louis Trichardt.

“I was among the eight grandchildren under the care of this grandmother. I thought it wise to fend for myself,” says Tambire.

He hopes one day to be able to help his grandmother look after the other children.