Finally: A solution to get rid of the beetle that is killing SA’s trees

A new technology developed by a South African company is the first to prove effective in killing the polyphagous shot hole borer, a tiny beetle that has been killing trees worldwide at an alarming rate. 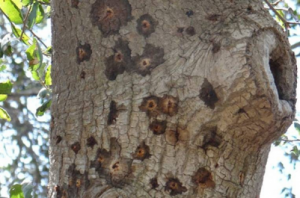 The beetle, a native of southeast Asia, is no bigger than 2mm, but carries a fungus that kills trees. It has been spotted in every province except Limpopo and, until recently, there was no way to stop it.

But Parys-based company Pan African Farms has come up with a solution to rid trees of the borer.

The treatment got the go-ahead from the Department of Agriculture, Forestry and Fisheries in June, which means it can be used as an agricultural remedy.

Professor Marcus Byrne, an Ig Nobel prize winner and entomologist at the University of the Witwatersrand, earlier told News24 that the beetle bores tunnels into tree trunks where it spreads the fungus Fusarium euwallaceae , which effectively cuts off the trees’ vascular system, causing them to die.

“It’s an ambrosia beetle, which means it carries a fungus which it feeds its babies on. When it introduces that fungus into trees that have never experienced it before, it threatens those trees with illness or death.”

Byrne says no one truly knows how the beetles made their way to South Africa.

“We happen to be a very connected world, and trade today allows for the movement of goods all around the world. We’re not very good at screening these animals that hitchhike around the world on our consumer goods.”

Unique, eco-friendly and smaller than a cell

“The core of our technology is nanotechnology,” Meyer says. “Our vesicle, as far as I could determine, is the smallest in the world at 10 nanometres.

“To give you some perspective: The smallest living cell is 10 microns. Our vesicle is 1,000 times smaller than that.

“That enables it to penetrate through most known barriers.”

Meyer says all fungi, including Fusarium, have a cell wall.

“This wall has always been regarded as impenetrable, but with our vesicles there’s an instant passage through that wall. The fungus can then be killed through a series of cellular attacks.”

And this is the only way to kill the polyphagous shot hole borer – by killing what it feeds on. Ultimately, the fungus is destroyed and the beetles die of hunger.

“After 24 hours of applying this to the bark of a tree, we could trace it to about 10 and a half centimetres into the tree. That distinguishes this product from anything else.”

Meyer says other fungicides used today are expensive, labour-intensive and become ineffective after a while.

The best way he can explain the vesicles, Meyer says, is to picture a tennis ball. That ‘ball’ is called an Anods – which stands for amphiphilic nano oil-delivery system.

“A tennis ball is hollow inside and surrounded by rubber. In the Anods, the ‘rubber’ part is then surrounded by fatty acids, and the hollow part is filled with the active ingredient needed to kill the fungus.”

According to Meyer, conventional pesticides are ineffective because of drug resistance as pests adapt, much like antibiotics in humans.

“But we have found suitable natural active ingredients that can destroy the Fusarium fungus. It is non-toxic and it won’t harm your tree.”

Meyer says, after application, the beetles pour out of trees in droves.

“We found that there was no trace of the fungus left.”

The local beetle infestation was first noticed in 2017 by Dr Trudy Paap – a postdoctoral fellow at the Forestry and Agricultural Biotechnology Institute (FABI) at the University of Pretoria – in the KwaZulu-Natal National Botanical Gardens in Pietermaritzburg, and it has since been found nationwide, including in Johannesburg and as far as the Northern Cape.

Johannesburg has an estimated 10 million trees. According to Andrea Rosen, co-director of the Johannesburg Urban Forest Alliance, the infestation is spreading fast.

“Some projections go up to half a million trees that are affected in Johannesburg alone, which is a substantial part of our urban forest canopy,” Rosen said. According to Meyer, that figure could be as many as 1.8m trees in the greater Johannesburg area.

“In urban areas, municipalities will have to act quickly to stop the spread of the borer beetles and save the trees that have already been infected.

“Each female beetle lays 20 eggs at a time in the bark of a tree. The life cycle is around 40 to 45 days and 60% of the population is female. According to my calculations, in 10 months, a single beetle can multiply to 50 million. That is an alarming figure.

“What worries me is that the beetles could spread to the Kruger National Park and the Knysna Forest.”

Spreading all over SA

The beetle has also spread to Cape Town.

So far, the identified infestation in Cape Town is limited.

For now, urban residents who notice the beetle in their gardens can buy the product directly from Pan African Farms.

“We have priced it to be user-friendly. They can then apply it to municipal trees growing on their sidewalks too, until such time as municipalities start using it,” Meyer says.

“This is happening in the north of Johannesburg right now.

“In Bloemfontein, for example, members of the community got together and decided to tackle the problem themselves.”

Signs of an infestation include wilted or missing leaves, dead or dying branches, as well as tiny and randomly spaced holes in the bark. These holes could have staining around them, or a white powder or gum-like blobs oozing from them.

“It looks like the trees are weeping,” says Meyer.