The Zwartkops Raceway near Pretoria celebrated Women’s Month in appropriate style this past Saturday, with a full programme of Extreme Festival racing producing great spectacle and some feminine results. Lady racer Landi Sinden provided a huge highlight by winning the opening Bridgestone Challenge race on her Milwaukee Yamaha R6, one 100th of a second ahead of Corrie Goosen (Live Your Dream Yamaha R1). Third, another 10th of a second adrift was fellow lady racer Morongoa Mahope (Kawasaki ZX6). 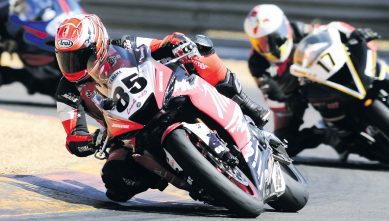 Sinden made history by becoming the first woman to win a Superbike race at an Extreme Festival event. Goosen won race two, chased to the flag by Mahope and Sinden.

The next race meeting at the Zwartkops Raceway will be a Historic and Inland Tour event on Saturday, September 7.