'We were dodging all kinds of things – dead cats, dead dogs, all kinds of crazy stuff that we picked up… people won't believe what ends up in those canals or rivers…' 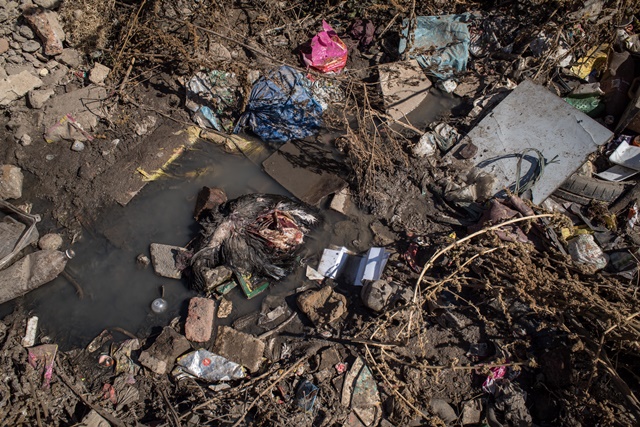 Picture is for illustrative purposes. A dead bird can be seen in the Kaalfontein wetland. Birds and ducks are often still seen along the river but there no longer seems to be any fish or life in the water anymore. If nothing is done in to prevent the ongoing pollution this river and all the eco systems relying on it will soon no longer exist.

An annual survey of Cape Town’s rivers has uncovered “appalling” levels of pollution in the city’s waterways.

The Peninsula Paddle, which took place over the weekend, was started in 2010 to highlight the state of the canals, rivers and lakes between Muizenberg and Woodstock.

Since then the City of Cape Town and the Invasive Species Unit made great strides in tackling solid waste and alien water weeds.

But kayakers were left “horrified” by the pollution they encountered on the route, in particular a giant garbage patch in the Black River.

“On Sunday afternoon, as we came through this section… we were absolutely flabbergasted,” Dr Kevin Winter, one of the founders of the initiative, told News24.

Winter is an environmental scientist at the University of Cape Town and a water expert at the university’s Future Water Institute.

“We were dodging all kinds of things – dead cats, dead dogs, all kinds of crazy stuff that we picked up… people won’t believe what ends up in those canals or rivers…”

But the plastic waste and water hyacinth clogging a section of the Black River left the whole team shocked.

“It’s just a sea of plastic… it is the worst we’ve ever seen,” Winter said.

“The other place for us that was really bad was in the Steenberg canal… I don’t think we’ve ever seen it as bad as that – just whole islands of rubbish that we were paddling through, or walking through, because we couldn’t paddle…”

Scientists also took water samples and found E.coli bacteria exceeded 1 million colony forming units (cfu) per 100ml. Winter said recreational users shouldn’t be exposed to more than 1,000 cfu per 100ml and expressed concern about the risks to anyone coming into contact with the water.

“We were paddling in raw sewage at one point,” he said.

Winter warned that the pollution would find its way into Table Bay with the next rainfall unless something was done about it.

Winter said he hoped highlighting the deterioration would be a wake-up call, not only to the city, but to residents who discard pollutants into the rivers.

“The health of the city is seen in its waterways and what I mean by that is when you look at rivers like this you can see that our city is really unhealthy.”