It wasn’t racism at all, says Mapimpi, about ‘whites-only’ Springbok hug

The Springbok winger says people on social media were too quick to cry racism. 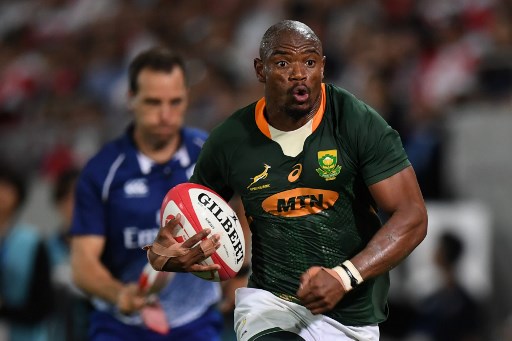 South Africa's Makazole Mapimpi runs to score a try during the friendly rugby match between Japan and South Africa at the Kumagaya Rugby Stadium in Kumagaya on September 6, 2019. (Photo by CHARLY TRIBALLEAU / AFP)

Footage of a group hug that appeared to exclude black Springbok player Makazole Mapimpi after their emphatic win over Italy yesterday led many to cry racism, but the player has moved to dispel this emphatically.

Mapimpi took to Instagram to explain in a video post that the only reason he was not part of the celebration huddle was because it was a ritual for bench players who are known in the team as the “bomb squad”.

The video went viral yesterday and appeared to show Mapimpi trying to form part of the group huddle, only to walk away.

Mapimpi has said it’s purely coincidence that everyone in the hug was white. Numerous photos have been doing the rounds showing that the squad celebrate and hug each other across supposed “racial lines”.

If yall really believe any caption, then what about this, still racist? Le a tena maaarn not everything is about racism. pic.twitter.com/UWAHF52VR6 “We have players who we call the ‘bomb squad’,” said Mapimpi, in a translation provided by SA Rugby Mag.

He explained these players were those who the game plan called on to come off the bench in the second half to introduce energy into the team and have a major impact.

“They have their own calls and their own spirit as the bomb squad,” he said.

“Basically what happens after each game is that we shake hands with the opposition. As we were completing the handshakes, the bomb squad was coming together to do their call or chant.

“As I was walking towards them I realised that they were about to do their call, and that I wasn’t part of it, so I decided that I needed to move away.

“I wasn’t part of it, but there was nothing wrong there with what they were doing. We are united as a team.”

Other observers noted that Frans Steyn also shooed lock Lood de Jager away with a hand gesture for the same reason – that he wasn’t a bench player.