Duane isn’t feeling any pain from the Japanese’s pinch

The world is gunning for the Springboks to fall victim to the host nation, but their grizzled No 8 isn't worried. 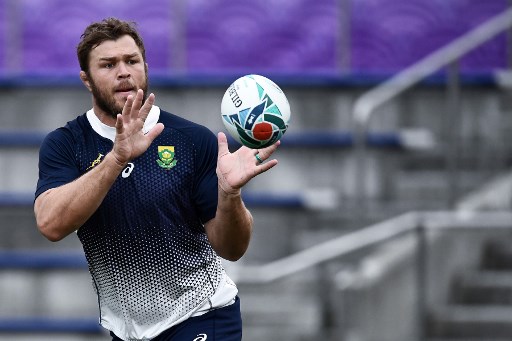 If any of the 248 players left in Japan from the eight Rugby World Cup quarter-finalists are feeling the pressure, Springbok No 8 Duane Vermeulen is not one of them.

Instead, the 50-cap veteran is looking forward to the “fun” of carrying the hopes of one nation and “enmity” of another on his shoulders.

“I play my club rugby here and I really enjoy it. I love the country; I love the food; I love the culture and what’s better than playing the host country in a quarter-final? It’s definitely something you need to embrace and I’m looking forward to it.”

That means embracing the desire of the local population of 126 million wishing to see you lose – and probably the vast majority of global rugby neutrals who have been entranced by the Japanese rugby fairytale.

But to Vermeulen it’s just another rugby game, against a unique opponent, whom he knows well, having played club rugby in Japan (as well as in Europe and South Africa).

“The club teams do everything at 100mph,” he said.

“It’s training, it’s fitness, the guys don’t rest – the work ethic on the field, off the field is fantastic; it’s a fantastic culture.

“But you’ve still got to pitch on the day. That’s the most important thing for us.”

Springbok fullback Willie le Roux is also a veteran of Japanese club rugby and will be appearing for Toyota Verblitz after the tournament.

“After the 2015 Rugby World Cup I came over to play Top League in Japan and I really enjoyed it,” Le Roux said.

“It’s very open. When the people back home ask me how I would describe it I say it’s like Sevens rugby played by 15-man teams; very quick; run from everywhere.

“In the Top League sometimes there’s not much structure and everyone just plays what they see, and it was fun; enjoyable.”

The Japanese national team has far more structure under their New Zealand coaching team and although their victory over South Africa at the 2015 Rugby World Cup remains a constant theme for local media, the Springboks’ 41-7 victory in Kumagaya at the beginning of September perhaps has more relevance.

“It’s not something that you’re generally used to, but luckily we played Japan five weeks ago or so we’ve experienced the style they play.

“They’ve said that they want to play a 50-minute ball-in-play game and that’s a bold thing to say but it’s also a good thing to chase.

“I think they’ve reached 39 minutes and a few seconds so far, so they’re 11 minutes shy but you never know that might happen come Sunday.

“So they’ve got a specific style, and they pride themselves on that style, and we also have our specific style. But we also need to adapt to their style and see what we can do to counter that.”