The final is on Saturday in Yokohama, starting at 11am. 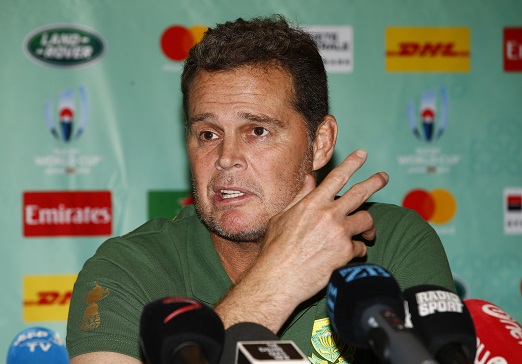 The win has set them up for a repeat of the 2007 final against England, who will go into the final as the favourites after their clinical 19-7 win over defending champions New Zealand. The Boks have never lost a RWC final, winning 15-12 in 1995 against New Zealand and 15-6 against England in 2007.

The superstitious may note those previous wins had a 12 year gap between them and it is now 12 years since their previous final appearance.

“Being in the final, I believe we regained some respect from the people of South Africa, but we are only halfway there,” said Erasmus.

“We would love to win the World Cup, but we are also up against a very classy England side. But we are there and we have got a chance now. Now we might go all the way, so you never know.”

The win didn’t come easy and required a great steal by Francois Louw, a magic kick by scrumhalf Faf de Klerk and a powerful scrum in the dying moments of the game to keep the Welsh out.

“It was nerve-racking at the end and after losing the previous four matches against them, it could have gone their way again,” said Erasmus.

“I’ve got so much respect for Wales and their coach, Warren Gatland, and I thought that last few minutes they might pull it through again.”

Flyhalf Handre Pollard kicked 14 points while the Boks’ only try was scored by centre Damian de Allende, while a crucial penalty by Pollard four minutes from time was the only real difference.

“I think there was a little bit of luck on our side, but I’m very proud of our guys … but very tough to win against Wales because they are a really classy outfit,” said Erasmus.

Erasmus used his bench well, but said it was sometimes tough to make substitutions.

“No one really cares who you substitute, even our captain. He takes it on the chin and Louw came on and made that wonderful turnover. At the end, we also defended very well on the try line and those things gel a team together – and that grows team spirit,” said Erasmus.

The final is on Saturday in Yokohama, starting at 11am.

After the match, President Cyril Ramaphosa tweeted a message to his English counterpart, saying: “See you on Saturday BoJo @BorisJohnson when you will be watching Siya, the team and I hoist high Webb Ellis Cup. A STERLING showing once again by the @Springboks. Our national teams have just been doing amazingly on the international stage.”