Castro looking to lead Chiefs to victory against Pirates

The Colombian is again up against his former coach having worked with Rulani Mokwena at Sundownds when he was Pitso Mosimane's assistant. 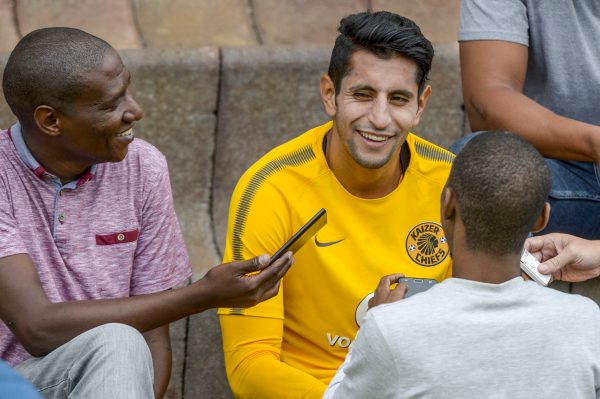 Leonardo Castro used the recent exhibition match against former team Mamelodi Sundowns to force his way back into the Kaizer Chiefs team and it one of the players who will be looked up to to see Amakhosi past Orlando Pirates at Moses Mabhida Stadium this afternoon.

The Colombian is again up against his former coach having worked with Rulani Mokwena at Sundowns when he was Pitso Mosimane’s assistant.

But he deflected the question on his possible knowledge of Mokwena’s approach, saying is rather focused on Chiefs and what they can do. “We know they have a good squad but the focus is on our team and our job,” he said. “I’m not looking at what they are doing,” he added.

Castro’s return to the Amakhosi starting team has rekindled his combination with Khama Billiat and they are slowly forming a deadly attack with Samir Nurkovic in what has been termed the “NBC” attack.

“I have known Khama for a long time. We have known each other for so long. We can close our eyes and play together. It’s easy to play with him,” he explained.

He said with Nurkovic they are still building an understanding but he is happy with how they have done so far. He played with the Serbian striker for the first time in last Sunday’s 2-0 win at Sundowns.

“It was a first game for me to play with Samir from the start. In training we are doing the right things to prepare ourselves. But there is a long way to go to know each other more,” he said.

Castro may not be a prolific striker who scores in every game but when he is in the mood he can be a big threat with his hard running and off the ball movements.

He was involved in a controversial situation last weekend as he was suspected to have interfered with play in Nurkovic’s first goal. But television replays showed that he hadn’t touched the ball as he attempted a header.

Mosimane however insisted and when asked about the issue, Castro confirmed that he didn’t touch the ball.
“I didn’t touch that ball. If I had, it would have went on to be a goal because that was what I was aiming for,” he said.