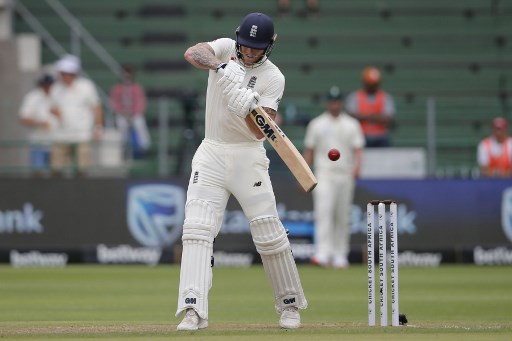 England's Ben Stokes plays a shot during the second day of the third Test cricket match between South Africa and England at the St George's Park Cricket Ground in Port Elizabeth on January 17, 2020. (Photo by MARCO LONGARI / AFP)

The Proteas are on the ropes in the third Test against England in Port Elizabeth, enduring a woeful second day with the ball at St George’s Park.

At stumps, the hosts were 60/2 in reply to England’s first innings total off 499/9 declared.

It leaves South Africa a massive 439 behind, but they will be counting on the fact that this PE wicket has offered little in the way of assistance to the seamers.

For the second time in the Test match, the Proteas went wicketless in the first session as news broke that premier strike bowler Kagiso Rabada would miss the fourth Test at the Wanderers through an ICC ban.

Rabada’s animated celebration after he clean bowled Joe Root on day one was deemed over-the-top by the ICC and the demerit point he picked up as a result means he is suspended for one match.

The Proteas bowlers, once more, were flat.

Ben Stokes (120 off 214) was at his ruthless best all morning while Ollie Pope (135* off 226) carded a maiden Test ton and the pair shared a mammoth 203-run partnership for the fifth wicket that ultimately buried the Proteas.

By the time England declared on 499/9, South Africa seemed out of ideas and had a high-risk English charge in the search of quick runs to thank for their wickets.

Keshav Maharaj (5/180) was the pick of the Proteas bowlers and was rewarded for his persistence, but it had turned ugly for the hosts by the time they were put out of their misery by the English declaration.

No 10 Mark Wood belted 42 off 23 to share a blistering 73 (53) stand for the ninth wicket with Pope as the South African wheels came off spectacularly.

When play resumes on Saturday, the Proteas will have opener Dean Elgar (32* off 59) and nightwatchman Anrich Nortje (0* off 3) at the wicket.

Elgar took a nasty blow to his arm off England paceman Mark Wood, but showed familiar fight to be there at the end of play.

Elgar’s opening partner, Pieter Malan (18 off 32) was out caught and bowled to spinner Dom Bess (2/12 off 6) while No 3 Zubayr Hamza (10 off 14) was out caught at short leg off the same bowler to give the visitors the overwhelming upper hand in the contest.