Sharks' Aphelele Fassi runs in a try during the Super Rugby match between New Zealand's Highlanders and South Africa's Sharks at Forsyth Barr Stadium in Dunedin on February 7, 2020. (Photo by Marty MELVILLE / AFP)

Sharks coach Sean Everitt makes no secret of the fact that he relies on Aphelele Fassi and Makazole Mapimpi to provide “flair” and “excitement” in his backline.

Yet in 22-year-old Fassi’s case, it’s not going to be that inherent X-factor that will probably see him gain a Springbok cap later this year.

Instead, Everitt has hailed his gifted young fullback’s newfound ability to vary his game as the newest and best string he’s added to his bow.

“Aphelele has brought a bit of balance to his game this year,” the Sharks mentor said from Wellington on Tuesday, where the Durbanites face the Hurricanes on Saturday.

“He’s now starting to develop his kicking game when maybe last year he was still running the ball back. That obviously has given us a bit more options and it makes him more unpredictable too.”

That will be music to the ears of new Springbok coach Jacques Nienaber, who’s acutely aware that Test rugby is far more of a grind than Super Rugby, but will also be heartened that a potential long-term successor for Willie le Roux can be explored.

Importantly, Fassi also has the immense of example of national winger Mapimpi, who’s willingness to look for work should assist in preparing his younger teammate for the rigours of international rugby. 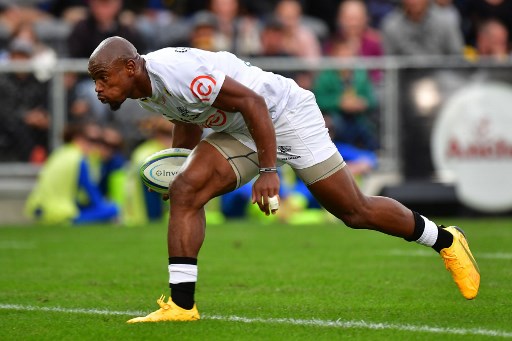 Sharks’ Makazole Mapimpi runs in a try during the Super Rugby match between New Zealand’s Highlanders and South Africa’s Sharks at Forsyth Barr Stadium in Dunedin on February 7, 2020. (Photo by Marty MELVILLE / AFP)

“His work rate on the field is amazing. If you look at his first try, he came from deep in the 22. The ball was nowhere near him and he ran himself into a position to score. Makazole senses blood and then he chases after it. That gives the players confidence. The guys look up to Mapimps, he’s a World Cup winner, scored a try in the final. He’s a bit of a hero among the boys,” said Everitt.

So comfortable has the Sharks coach become with his resources that he didn’t even actively realise he had eight players of colour in his starting XV.

“It’s got nothing to do with doing anything intentionally and that’s from a development point of view as well. The players that we have at the Sharks are selected purely on merit and I’ve never once had to look at the numbers to select the team.

“Whether I’ve been coaching at juniors or seniors, they’ve always been there and I believe that they’re the best in their position and warrant their selection on merit,” said Everitt.