Bad weather and a tough route tested crews and cars to the full in the weekend’s Mpumalanga 400, the opening round of the 2020 South African National Cross Country Series around Dullstroom. 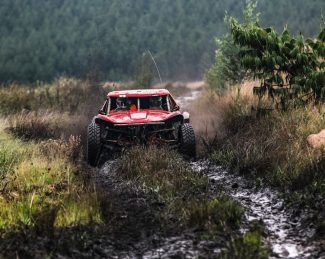 The muddy, wet and misty conditions took a heavy toll on the Special Vehicle contingent, who, not blessed with windscreens, got closely involved with a lot of Mpumalanga upper soil. This made racing a bit of a lottery, with many crews destined to hit hidden rocks, tree stumps and ditches.

In the end, the highly experienced crew of Clint Gibson and navigator Alaric Smith (Dirt Sport Components Stryker) led the field home, to take both the overall and Class A victories. Second, after a smooth, careful and consistent run, were newcomer driver Tim Howes and experienced navigator Gary Campbell (Zarco Magnum).

Third overall, winning the Class G category for Side x Side vehicles in the process, were Dean Bradbury/Timmy Botes (Canon Rotax). They were followed to the finish line by Theo Erasmus/Edward Odendaal (Can-Am Maverick), Nico du Rand/Rickus Hattingh (Can-Am Maverick), plus Sandra Labuscagne-Jonck and husband Jaco Jonck in their Class A Total Agri Porter. The seventh and final team to reach the finish, were father and son Archie and Kent Rutherford in their Red-Lined Can-Am Maverick.

The next round of the 2020 South African National Cross Country Series will be the Sugarbelt 400 race, scheduled to take place on 3 and 4 April through the Eston area in KwaZulu-Natal.