Cash van Rooyen's charges look all over the show as the spectre of a long and damaging overseas tour now looms large. 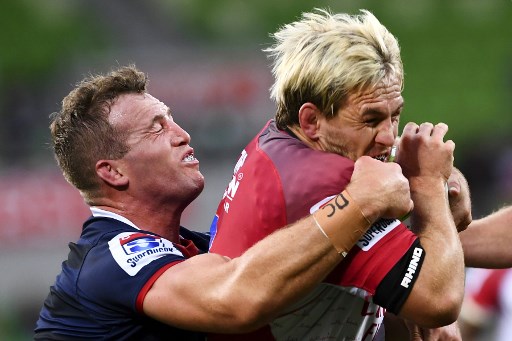 Lions player Marnus Schoeman (R) is tackled by Rebels player Angus Cottrell (L) during the Super Rugby match between Australia's Rebels and South Africa's Lions in Melbourne on March 7, 2020. (Photo by William WEST / AFP) / -- IMAGE RESTRICTED TO EDITORIAL USE - STRICTLY NO COMMERCIAL USE --

It has gone from bad to worse for the Lions as slow starts and soft moments on defence continued to haunt them in Melbourne on Saturday, outclassed 37-17 by the Rebels.

Cash van Rooyen’s troops are now a team in real trouble as this is their third straight loss and fourth in five games, leaving languishing in 13th position on the overall log.

The Rebels, who outscored the Lions by five tries to two, went into an early lead of 15-0 and despite the visitors fighting back to reduce the deficit to 15-10 at the break, it was another soft try by the Rebels, three minutes into the second 40, which steered them to a decisive lead.

And, as has become apparent, the Lions don’t play catch-up rugby very well.

Rebels flyhalf Matt Toomua showed why he has played so much Test rugby for the Wallabies. His cool head allowed him to make the right calls. He brought his backline into play with some sound decision-making while spotting the spaces behind the Lions defence to keep them pinned back into their own half.