The station has been in hot water all morning for what many on social media deem ‘racially insensitive' and 'privileged' reporting. As panic around the coronavirus outbreak mounts and South Africans adopt new ways of living in an effort to curb the spread of the virus, various publications have been at the frontline trying to document what this looks like.

The news arm of local radio station Power FM has, however, landed in hot water all morning for what many on social media deem “racially insensitive” and “privileged” reporting.

While the account has been reporting from various locations around the province all morning, the offending tweet is one that painted commuters at the Bree Street Taxi Rank as “indifferent about taking precautionary measures”.

“It’s business as usual at the Bree Taxi Rank, where a litany of commuters flock daily. People seem to be indifferent about taking precautionary measures against #Coronavirussouthafrica,” tweeted @Power987News.

It's business as usual at the Bree Taxi Rank, where a litany of commuters flock daily. People seem to been indifferent about taking precautionary measures against #Coronavirussouthafrica pic.twitter.com/QQljYc1kW9

Various users immediately questioned the station’s framing in a number of tweets. 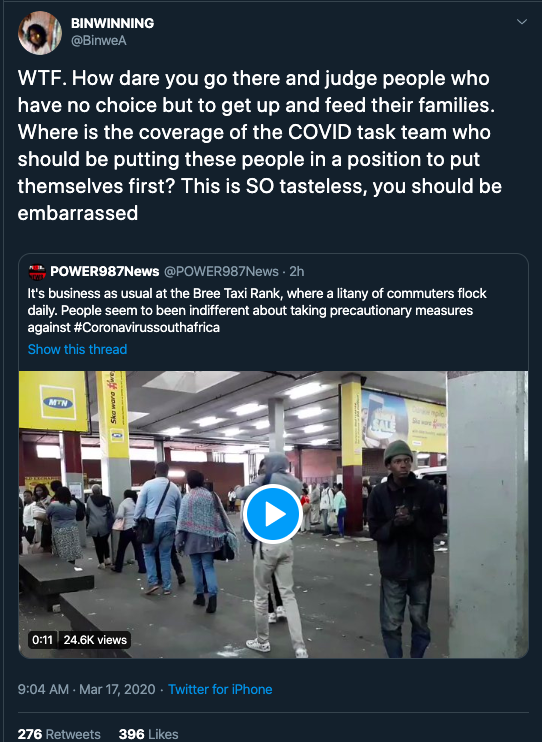 I'm just reporting this tweet because it's stupid. You'll attack the people who have no option but to use public transport. Instead of the uncivilized individuals who were panic buying yesterday, using trolleys/baskets etc, no sanitization AND not the government? Disgusting

Y'all act like you don't know or understand the system, we all know the poor and middle class with no cars or right finances would suffer more in this epidemic. Instead of you guys handing out masks and sanitisers to these people, you speak ill of them. You are twisted.

Not an indifference at all but this is a rather sad reality of the plight of a black child. The inequality runs so deep.Meanwhile the minorities are emptying shelves of essentials,we have to risk our lives going to make money for them.#Coronavirussouthafrica

When asked for comment in response to the backlash, a Power FM employee/representative simply referred The Citizen back to their online report titled “Coronavirus: taxi operators, commuters worried but say they have no choice“.

The report was compiled after Power News reporter Robinson Nqola went to the Bree Taxi Rank in Johannesburg to speak to commuters and taxi operators who said that although they were deeply worried about getting infected by the coronavirus, it would be far too economically risky for them to stay at home and avoid social interaction.

Many of them who are breadwinners say if they had an option to work from home they would, but their working environments require them to be physically present at work.

READ NEXT: Workers need permission to be absent from work