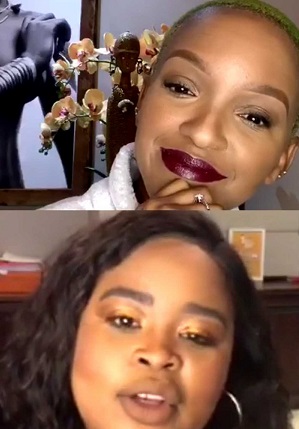 In a far-ranging, honest, and emotional conversation, media and TV personalities Nandi Madida and satirist Lesego Thlabi tackled racism in private and former Model C schools they attended during their schooling years.

During their Instagram live discussion, Madida said she could not believe that in 2020 black children are still facing racism from their peers and from teachers.

In reflecting on the racism allegations at Durban Girls College, Madida said going to the school was a real shock.

“Coming from a multicultural and diverse primary school that was welcoming, somewhat enjoyable, and then going to Durban Girls was a different animal.”

Madida said for the first time in her life she heard the k-word in Grade 5 from a white friend who called her dog this: “She apologised realising what she had said in front of me, but I had never heard the word before, so I went and told my mom. She was shocked. My mother gave me a whole history of what the k-word meant, going back to school the next day was quite traumatic.”

She says racism is taught: “Racism is not our sickness, it is yours (white people). You should be having the conversations at your homes, children as young as 8 to 10 years old should not be thinking that way at all, which means they are taught at home, indoctrinated with this thought. ”

Thlabi, who is better known as satirist Coconut Kelz, went to a private girls’ boarding school.

“Microaggressions are, ‘you speak so well for a black person’, ‘you’re not like the others’.”

Thlabi said she wanted to address racism in the form of comedy after the Parktown Girls High School hair scandal, where black girls were told to have their hair ‘neat’ or not allowed to have it in its natural state (afros).

Madida further explained that the school’s hair policy was anti-black because they weren’t allowed to show off their natural hair. In some instances, they would have to write a letter to be allowed to do braids.

“Black learners would complain about how they were treated and the reaction we would get from our peers would be, ‘why don’t we go back to our own schools?’… Township schools,” Thlabi said.

“My first incidence of knowing that there was racism in my school was our names. Very micro… I would say my name is Lesego and the white girls would automatically call me Lee, I felt powerless to say anything, okay if you’re going to make friends, you’re going to speak in a language they understand or allow being nicknamed.”

Both reflected on how black learners’ intelligence would be questioned. Doing well in school was a surprise. It did it fit their narrative that black people are not smart.

The satirist says some of the content she uses is from Facebook comments, her way of venting the racism and that going forward there should be black alumni so former learners can have a safe space to talk, a network for accountability.

“I went back to my school in 2018 to give a speech and I saw that there was still a ‘black’ table, where the black girls would sit, so I went to speak to them and they explained to me experiences that mirrored mine,” Thlabi said.

Recently there have been threads on social media were learners and former learners would call out schools they went to, describing the racism they experienced.

Thlabi said there should be an external body or organisation that addresses racism in schools not the teachers or principals.

Madida added their needs to be education about racism and should be taught truthfully.

Rental race row: 'My boyfriend is coloured, my assistant is black'
9 hours ago
9 hours ago
PREMIUM!

Rental race row: 'My boyfriend is coloured, my assistant is black'
9 hours ago
9 hours ago
PREMIUM!