70 volunteers removed a total of 55 bags of polystyrene, 69 bags of plastic bottles and 327 bags of general rubbish from the river in Centurion. The meeting point of the bright green Rietvlei River and the dirty grey water from the Olifantspruit River. Image: supplied.

Rekord Centurion reported that Johnston said the polystyrene will be recycled into building bricks for a green housing project. The clean-up kicked off at the section of the river that runs underneath the Hendrik Verwoerd bridge where volunteers cleaned from early in the morning until around 2pm.

“Weird finds this weekend include the remains of a dead duck, dog and fish.” 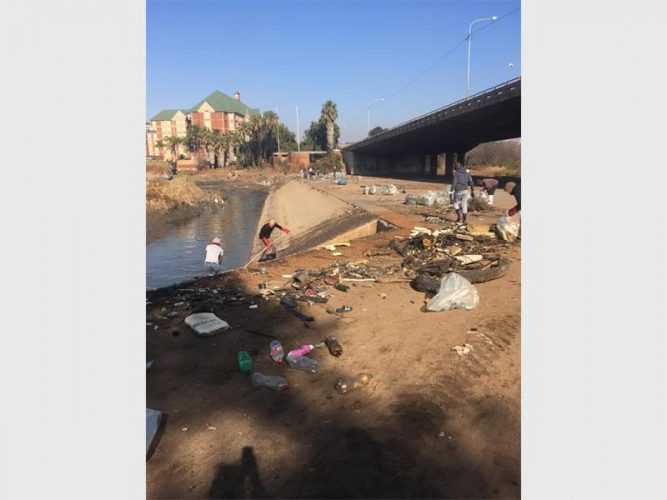 Volunteers get their hands dirty over this weekend under the Hendrik Verwoerd bridge. Image: supplied.

Johnston and her team had to make use of safety harnesses to clean up the slippery slopes of the area under the bridge. When most of the volunteers left for the day, the remaining group went back to the lake at the Centurion Hotel where they cleaned further until late in the afternoon. While cleaning the river Johnston and her team made an interesting discovery.

“There is space in Irene where the two rivers, the Rietvlei and the Olifantspruit meet and you can see the bright green water and dirty grey water. It is madness! There is definitely something in the water.”

Johnston further said she made another shocking discovery when she returned to the river the following day to take pictures of the bags of waste they collected the previous day.

“There was sewage everywhere. It is hectic how much sewage has collected over the night, quite scary.”

“The level rose more than a metre which is a lot of sewage deposited overnight. There is something coming from somewhere and it is a huge amount.”

Despite the alarming discovery at the river, Johnston described the clean-up as one of the best so far.

“Everybody just got in and did what needed to be done. It was an amazing day. Thank you so much,” Johnston concluded.