Barkeep Luca de la Guerra said, 'We told him he can't come inside, we're not serving alcohol. Another person said, 'give that seal a Bells'.' 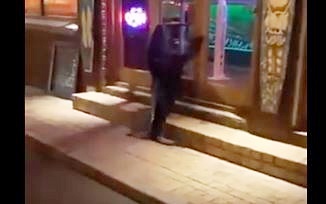 A seal waddled up to the door of Pakalolo restaurant in Table View, Cape Town, and banged on the door, 2 July 2020. Picture: Twitter / @MduBeernong

The staff at Table View beachfront’s popular bar, Pakalolo, got a surprise when a disoriented seal waddled over six lanes of traffic and banged its flippers on their door.

Inside a neon sign flickered for takeaway food, and a sanitising station was positioned nearby.

Customer Erna Beetge, known as the “flower lady”, was taking a break from her online florist business to order food when she spotted the seal.

“It was crossing the road to the shop in the afternoon,” she said.

She said it sat for a long time and gathered quite a crowd of onlookers. “Everybody was trying to woo it to get back in the ocean, but it was trying to get into Pakalolo.”

Beetge said the situation lasted a long time, and the seal looked tired and hungry. She rushed off to a local supermarket, bought a few Russian sausages, and offered it to the seal.

“He was not interested. He was probably pescatarian,” she said.

“But he was obviously desperate and in need of help.”

Manager Lee van Jaarsveld said: “He kept bumping his head against the door.

They closed the doors and called for assistance.

In the meantime, bakkies and cars blocked the roads, so the seal would not be injured as it flailed. A woman, who said she knew a bit about seals, came and advised people on how to behave around the seal, to keep it calm until help arrived.

When the commotion started, 11-year-old Jiyara Nanda was sitting in front of her pink bedazzled laptop, while her dad Jitesh worked on a specially designed food-ordering and pick-up app for restaurants to work more efficiently when customers do kerbside collections.

“He just came across the beach and up here,” said Jiyara, pointing at the door near her makeshift workstation for schoolwork.

“The seal got scared,” she explained.

She said one of the onlookers tried to approach it with a stick, but was shouted down by everybody else.

Barkeep Luca de la Guerra said, once the shock wore off, some lockdown humour set in, while they waited for the seal rescuers to arrive.

De la Guerra said: “We told him he can’t come inside, we’re not serving alcohol”.

She said: “Another person said, ‘give that seal a Bells’.”

Others quipped that he may have known he was not allowed on the beach during lockdown level 3.

But the bystanders were very actually very concerned.

A security company also helped to block the road until help arrived.

“It must have been crying out for help,” said De la Guerra.

The SPCA calmly surrounded the seal, with one of the onlookers assisting, and eventually it was netted and pushed it into a container.

It was transported by the SPCA to a sanctuary in Hout Bay to recover.

He suspects the seal, now named Pakalolo, had lived at the harbour and fed off treats from tourists and people who work in the harbour.

He said that with businesses closed during the lockdown, including his own tourism enterprise – Cape Town Bucket List Seal Snorkeling – easy food would have been scarce for the seal.

More used to being fed by tourists and workers, he had to find his own food, and it might not have gone so well because he appeared to have lost some weight.

That, and swells of up to seven metres during the weekend’s storm, could have pushed him on to the Table View beach, where he may have seen the lights, and made the association with food.

Van der Walt said the seal had been given antibiotics to treat a cut on his nose – possibly caused by bumping into one of the ships out at anchor – but is otherwise doing well with the other seals at the sanctuary.