“We convey our condolences to the loved ones of the departed and thank the health workers that treated the deceased,” the minister added.

Meanwhile a total of 7,433,571 tests have been completed with 74,830 new tests conducted since the last report. 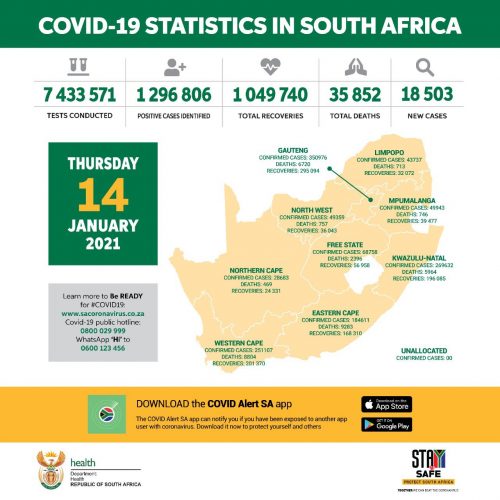 WHO meets over variants

The French government will impose a daily nationwide curfew at 6:00 pm starting Saturday and for at least two weeks, Prime Minister Jean Castex announces, saying the situation is “under control”, but still “fragile”.

It will also require a negative Covid test for all non-EU arrivals.

China reports its first virus death in eight months as 10 WHO scientists land in the country on a mission to examine the origins of the pandemic.

A full lockdown starts in Lebanon, with residents barred even from food shopping and dependent on deliveries.

Britain says it will ban all arrivals from South American countries and Portugal from 0400 GMT Friday over fears of importing a new coronavirus variant in Brazil.

Both Pope Francis and his predecessor, former pope Benedict XVI, have received their first jabs, with Italian media saying it was the Pfizer-BioNtech vaccine.

The pandemic has killed more than 1,979,596 million people worldwide, according to a tally compiled by AFP using official sources and information from the WHO.

The number of deaths globally is broadly under-estimated. The toll is calculated from daily figures published by national health authorities and does not include later revisions by statistics agencies.

Sweden, which is combating the spread of the virus with mostly non-coercive measures, passes 10,000 deaths associated with Covid-19, as it reports a record number of 351 deaths in a day.

Austrian MPs approve powers for the government to make a negative coronavirus test result mandatory for entry to cultural and sporting events as well as hospitals and  hotel stays.

New filings for unemployment benefits in the US surged 181,000 in the first week of the year, the biggest increase since the coronavirus pandemic began last March.

Delta Air Lines reports a $12.4 billion loss for 2020, following what its CEO calls “the toughest year in Delta’s history” amid the pandemic.

Andy Murray’s participation in the Australian Open which starts on February 8 is thrown into doubt after it is revealed he has tested positive for coronavirus.