Jeppe the owl sat on the beams for four classes and didn’t make a hoot while the science teacher continued the lessons. 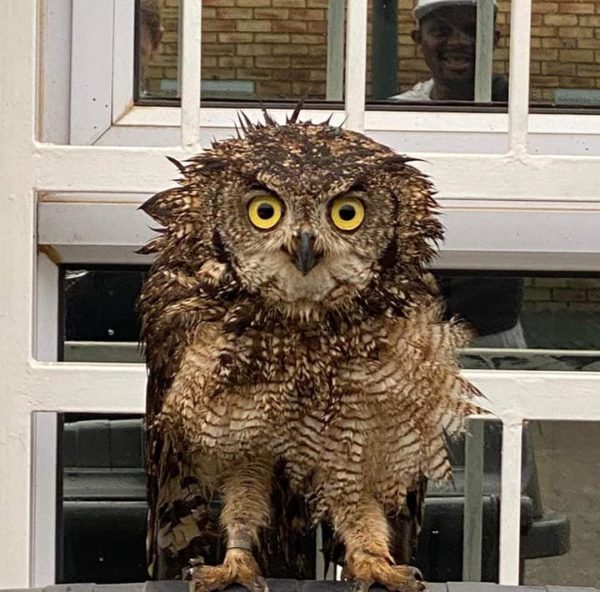 Despite supposedly being the wisest animal in the animal kingdom it would seem the owl rescued earlier this week from a science class at a school in Johannesburg is an eager learner.

The juvenile owl was named Jeppe after he spent four lessons in a science class at Jeppe Boys High School before being rescued by Brendan Murray from the Owl Rescue Centre in Hartbeestpoort on Tuesday.

“He is a perfectly healthy juvenile owl and had no injuries when he was rescued on Tuesday,” Murray said.

“We believe he came through an open window and sat on the beams of the roof before we rescued him.”

Jeppe is a fully grown owl of approximately three to four months old.

Murray said Jeppe sat on the beams for four classes and didn’t make a hoot while the science teacher continued the lessons.

When Murray arrived at about noon he was sitting quietly up on the roof and he was able to catch him on the first
attempt.

Murray then released Jeppe right outside of the classroom so he could return to his nest which is presumed to be
nearby.

Jeppe is one of the 12 different owl species found in South Africa ranging from the smallest that starts from 15cm in height to the biggest that is up to 70cm in height.

He said despite the popular belief owls do not have super short legs.

“Owls can turn their heads up to 270 degrees.

“They do this because they cannot move their eyeballs,” Murray explained.

Another interesting fact about owls is that they have specially adapted feathers which allows them to fly almost silently. He said what made owls special was that they could hunt in complete darkness using their hearing alone.

Murray added that this week a total of 53 owls were rescued by his team.

“Sometimes we rescue more than one at a time and up to five owls at a time along with eggs and nest,” he said.