Military on standby to evacuate fire-ridden towns in Canada

At least 152 fires were active in the western province of British Columbia, 89 of them sparked in the last two days. Climate change is likely playing a role in the devastation. 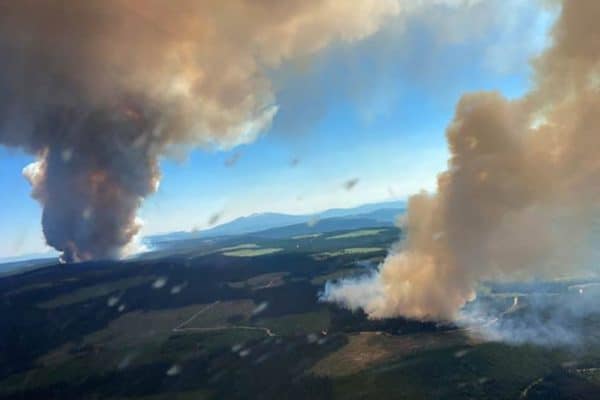 Canada’s government warned Friday of a “long and challenging summer” ahead as it prepared military aircraft to help evacuate towns and fight more than 100 wildfires fuelled by a record-smashing heat wave.

At least 152 fires were active in the western province of British Columbia, 89 of them sparked in the last two days, according to officials. Most were caused by lightning strikes.

The fires were north of the city of Kamloops, 350 kilometers (220 miles) northeast of Vancouver.

While the immediate blame for the scorching heat in Canada has been placed on a high-pressure “heat dome” trapping warm air in the region, climate change is causing record-setting temperatures to become more frequent.

Globally, the decade to 2019 was the hottest recorded, and the five hottest years on record have all occurred within the last five years.

“The dry conditions and the extreme heat in British Columbia are unprecedented,” Public Safety Minister Bill Blair said Friday. “These wildfires show that we are in the earliest stages of what promises to be a long and challenging summer.”

Prime Minister Justin Trudeau met Friday afternoon with an incident response group that included several ministers. He said he had already spoken with British Columbia’s premier, as well as local mayors and indigenous chiefs in communities under threat.

“We will be there to help,” he told a news conference.

The response group announced it would set up an operations centre in Edmonton, where armed forces will be able to provide logistical support. Military aircraft were also deployed to help.

Roughly 1,000 people have already fled the wildfires in British Columbia, and authorities are searching for many who have gone missing.

Late Friday, the British Columbia medical examiner’s office said there had been 719 deaths in the past week, “three times more” than the average number of deaths recorded over this period under normal circumstances.

“It is believed likely the extreme weather BC has experienced in the past week is a significant contributing factor to the increased number of deaths,” Lisa Lapointe, the province’s chief coroner, said in a statement.

The village of Lytton, 250 kilometers (155 miles) northeast of Vancouver, was evacuated Wednesday night because of a fire that flared up suddenly and spread quickly. Nearly 90 percent of the village was torched, according to Brad Vis, an MP for the area.

The fire came a day after the village set a Canadian record-high temperature on Tuesday of 49.6 degrees Celsius (121 degrees Fahrenheit).

“I cannot stress enough how extreme the fire risk is at this time in almost every part of British Columbia and I urge British Columbians to listen carefully to officials in your communities and follow those directions,” provincial premier John Horgan said.

The heat wave continued to spread across central Canada on Friday.

In addition to British Columbia, heat wave warnings were issued for the provinces of Alberta, Saskatchewan and Manitoba, as well as parts of the Northwest Territories and northern Ontario.

“A dangerous long duration heat wave will continue” and will bring “very warm temperatures over the next couple of days,” Environment Canada warned in bulletins for British Columbia.

“The duration of this heat wave is concerning as there is little relief at night with elevated overnight temperatures.”

Lytton resident Jeff Chapman told the CBC he saw his parents die in the fire that engulfed the town.

With only minutes to react, the elderly couple sought shelter from the smoke and flames in a trench in their backyard, as Chapman ran for safety at nearby rail tracks. From that vantage, he said, he saw the fires sweep across and destroy most of the town.

“Today our thoughts are mostly with families that are grieving, that are facing terrible loss,” said Trudeau during his press conference.

Further south, the US states of Washington and Oregon have also been sweltering under record-high temperatures this week.

Hundreds of firefighters scrambled Friday to contain three wildfires in drought-hit northern California that have scorched nearly 40,000 acres, including a popular tourist lake preparing to welcome hordes of visitors for the July 4 holiday weekend.

Evacuation orders were in place along stretches of Shasta Lake — a camping and boating hotspot 160 kilometers south of the Oregon border — as soaring temperatures and high winds spur blazes at a relatively early stage in the region’s fire season.

Around 40 structures were destroyed, including at least half a dozen homes near the town of Lakehead.

More than 500 lightning strikes were recorded in California in the last 24 hours, threatening to cause more fires.