Watch: Petrol station looter gets kicked around like a football

Like the world's best footballers, the crime fighter was equally comfortable delivering unstoppable kicks with both his left and right feet. 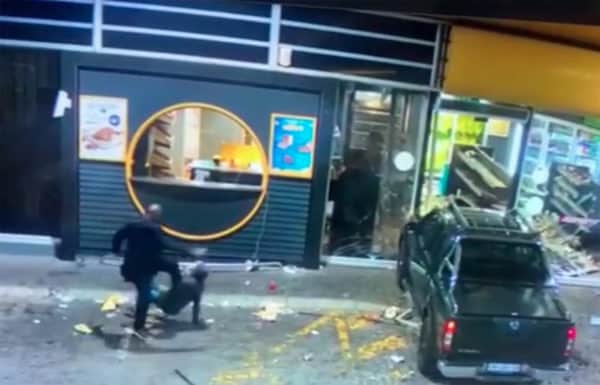 The identity of the mysterious man in black is not known.

An unfortunate looter got a lot more than he bargained for, when an unknown man decided to use his head and chest for kicking practice, in a flurry that would have made Lionel Messi proud.

In CCTV footage sent to The Citizen on Saturday, a horde of people can be seen swarming into what appears to be a Sasol convenience store. According to information, the store is located at a filling station in Tembisa and the incident took place on Saturday morning, but this could not be confirmed.

The group are seen emptying shelves and grabbing items behind the shop counter, and then all start running for it when a black Nissan Navara pulls right up to the door of the shop. The driver of the vehicle calmly gets out and walks toward the broken window through which several of the looters rushed to make their escape.

One of the looters is a bit slow to make his retreat, and as he jumps out the window, he gets taken down by a leg sweep, which is quickly followed by a right foot to the chest.

The mysterious man in black deftly evades what appears to be projectiles hurled at him by the man on the ground’s accomplices, and runs out of the picture for a few seconds.

This isn’t enough time for the dazed looter to get away though, and as he stumbles the man returns, and shows great ambidextrousity, as he delivers a couple of equally powerful kicks with his left foot.

These kicks leave the poor looter out colder than the icy temperatures currently engulfing the country, before the man in black calmly returns to his vehicle and drives off.

The Citizen could not reach Sasol to determine exactly where and when the incident occurred. Police could also not be reached for comment on Saturday.