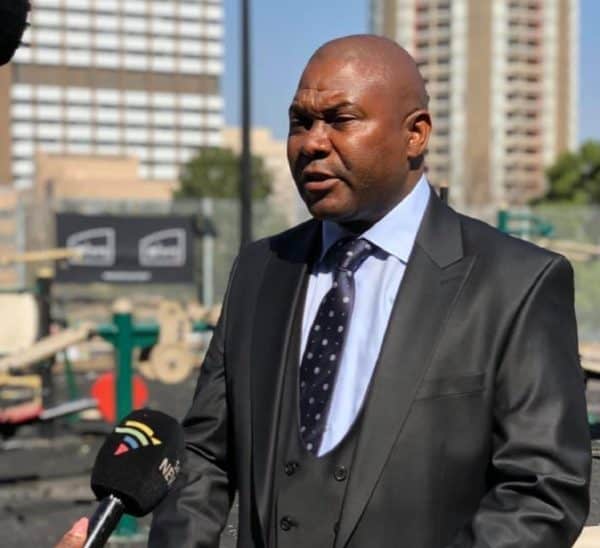 Johannesburg mayor Jolidee Matongo has apparently died in a car crash, following his involvement in the ANC election activities in Soweto on Saturday afternoon.

Details are sparse, as Matongo’s spokesperson could not be reached for comment. The accident was, however, confirmed by a member of his inner circle, who said he was also still trying to get more information before commenting any further.

Matongo was accompanying President Cyril Ramaphosa on the ANC’s election trail on Saturday.

President Cyril Ramaphosa received a less than warm welcome to Naledi, Soweto, on Saturday morning, as he joined the ANC on the campaign trail on the last voter registration weekend before the upcoming local government elections.

Ramaphosa was greeted by furious residents who accused the ANC of only remembering them when it is time to campaign for votes, and police had their hands full when residents tried to disrupt the president’s visit.

Among residents’ concerns was a continued lack of electricity in the community which is often the target of load reduction.

Former president Jacob Zuma has instructed his lawyers to challenge his jail sentence at the African Court on Human and Peoples’ Rights.

This is according to a tweet sent by the Jacob Zuma Foundation.

This comes after the Constitutional Court (ConCourt) on Friday upheld its decision to sentence Zuma to 15 months in prison.

Justice Sisi Khampepe delivered the judgement after the ConCourt’s full bench had deliberated on the matter over the past two months. The court also dismissed Zuma’s application with costs – including the cost of two counsel.

The City of Tshwane’s acting chief of staff Jordan Griffith has said the reasons Joe Nkuna is growing vegetables outside his home are not as charitable as he claims.

Nkuna, also known as the “cabbage bandit”, has said in Facebook posts that he donates most of the vegetables he grows. He says he started growing the vegetables outside his house in 2019 to help his wife, who does social work in Soshanguve.

Griffith, however, claims that Nkuna is also selling some of the vegetables to his neighbours.

“He has indicated that he is growing [the vegetables] for the nation and trying to do the public good. If you scrutinise some of his Facebook posts, I was alarmed to see that he has openly spoken about grabbing city land where he has planted food. He says he has a 100 metres of government-owned land, he’s feeding his neighbours at R10 per hand,” Griffith said on 702’s Azania Mosaka Show.

Golf 8 GTI even faster than what Volkswagen is telling us

We can finally let the cat out of the bag after putting the Volkswagen Golf 8 GTI through a high-performance road test.

And much to the delight of every fan of one of South Africa’s most adored badges, the end results are nothing less than impressive. Let’s jump into them without any further ado.

Wolfsburg claims the hot hatch can go from 0 to 100km/h in 6.4 seconds. We think they might have either played it very safe or are just genuinely modest. In his efforts to determine how close the Golf 8 GTI can come to this claimed time, The Citizen’s Road Test Editor Mark Jones was in for a big surprise. It not only managed to beat the claimed time, but by a proper margin too!

‘I loved them like my own’, says former nanny of SA children murdered in NZ

As the mother of three children appeared in a New Zealand court for their murder, the children’s former nanny in Pretoria, South Africa, was trying to make sense of the crime.

Dr Lauren Dickason was charged with the murder of her three children Liane, 6, and her twin sisters Maya and Karla, aged 2. She appeared in court in the town Timaru in New Zealand on Saturday morning, after being arrested for the murders on Friday.

The children’s former nanny, Mandy Sibanyoni, told the Pretoria Rekord she was was heartbroken, upon hearing the news of the children’s death. Sibanyoni had worked for the Dickason family between 2018 and 2020.

South African National Parks (SANparks) are investigating the bizarre deaths of 63 African penguins, whose bodies were found inside the Boulders African Penguin colony in Simonstown.

According to a statement on Facebook, the penguins were killed between Thursday afternoon and Friday morning, prompting an immediate investigation by SANParks, in collaboration with the City of Cape Town and penguin experts from the Southern African Foundation for the Conservation of Coastal Birds (SANCCOB).

The main suspects in the deaths are currently a swarm of Cape honey bees.