Mthobisi Baloyi and Lebogang Phalula dominated the men's and women's races at the third edition of the annual TomTom Tembisa Street Mile on Sunday. 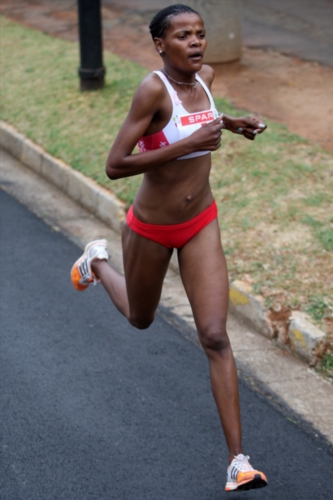 Baloyi sat back for most of the race before launching a final charge down the finishing straight, taking the lead with less than 100m remaining to win the men’s 1.609km race in the East Rand township.

He crossed the line in 4:11, one second off the course record set by national record holder Johan Cronje last year.

“I was surprised to see so many elite guys here. There were probably eight men who could have won today,” Baloyi said.

“I’m very impressed with the field they put together. It was a great race.”

Phalula secured victory in the women’s race in 4:44, smashing the two-year-old course record of 4:54 held by her twin sister, Lebo Phalula.

Lebo ended second in 4:49, two hours after winning the women’s 10km race in 35:43, and marathon runner Mapaseka Makhanya, a former track specialist, was third in 4:52.

Earlier, in the 10km event, Lebo Phalula finished more than a minute ahead of Tebogo Masehla, who was second in 36:49, and Mpho Mabuza settled for third spot in 37:25.

Lucky Mohale won a closely contested men’s 10km race in 29:51, crossing the line two seconds ahead of Desmond Mokgobu, and Elroy Gelant was third in 30:00.