Cronje is in need of speed

Competing for the first time since he grabbed bronze at the World Athletics Championships, Johan Cronje hopes to be dragged along by the pacemakers in Zurich tonight as he targets an improvement on his national record. 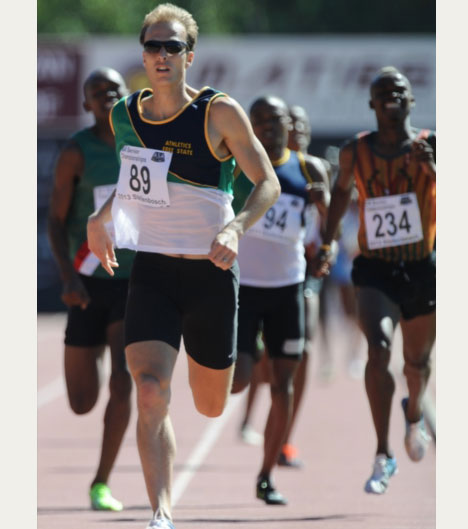 Cronje, above, lines up against a quality field in the men’s 1 500m race at the Diamond League meeting. Of the 18 men in the race, 14 have run faster than the 31-year-old South African, who clocked 3:33.46 to set a new national mark in Doha in May.

“There are pacers, so I’m going to give it a shot,” Cronje said before leaving for Zurich on Tuesday. “If the other guys don’t go with them, I will, even if it means I die over the last 300m.”

An investment consultant by profession, Cronje admits he hasn’t had much time to focus on his preparation since he returned from the world championships in Moscow early last week.

He hopes the hard work he has put in this season, however, will carry him through to a career best. “I feel okay but I haven’t been able to train much,” he said.

“I think it’s going to depend on my mental strength more than physical strength, and I’m hoping for a good race.” Meanwhile, Caster Semenya will compete for the first time since she failed to qualify for the Moscow showpiece.

Semenya is one of only three athletes in the field who have not dipped under two minutes this season, but the SA record holder boasts the fastest personal best in the line-up and she will be eager to approach her best form for the first time in the 2013 campaign.