University of Johannesburg law professor Thabo Legwaila has warned that social grant adjustments would put a burden on the government and the working class. 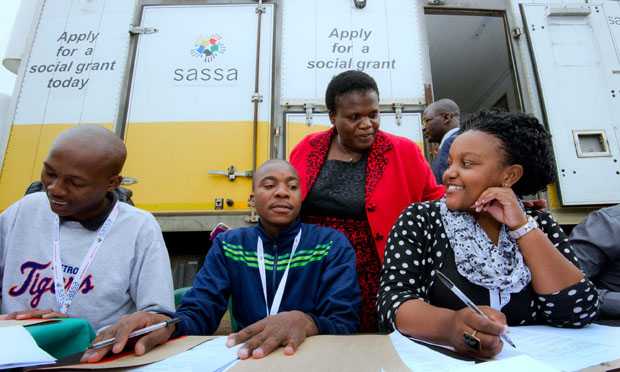 (in the pic - Minister Muthambi encouraging SASSA officials registering social grants and pensioners to expedite services to the community during an Imbizo held at Willowfountain sportsground, Imbali Township Ward 14 in Pietermaritzburg). Minister of Communications, Faith Muthambi engaging with provincial and local communicators on a ministerial outreach visit to Pietermaritzburg in Kwa-Zulu Natal province. 07/11/2014, Elmond Jiyane, DoC

“The social grants adjustments mean that government expenditure would increase as the number of social grants beneficiaries increase, “said Legwaila.

“The government would need to increase taxes from the working class and people with higher income.”

However, Legwaila said the adjustments were necessary and in line with the inflation.

“You do not want a situation where you place the poorer people in the poor situation, “said Legwaila.

“It was necessary to adjust social grants in order for poorer people to afford this year what they can afford next year.”

Finance Minister Nhlanhla Nene announced in his budget speech on Thursday that adjustments to monthly social grants will start from 1 April.

“In order to accommodate the growth in numbers, the budget proposals include an additional R7.1 billion on the Social Development vote.”

Nene said there was the possibility of further adjustments to grant values in October.