The Two Oceans Marathon in Cape Town next week will be run along the alternative Ou Kaapse Weg route for the first time in 12 years. “After weeks of intense discussions and close collaboration with the City of Cape Town and key stakeholders, it was confirmed that the Old Mutual Two Oceans ultra-marathon route will run along the detour route,” the organisers said in a statement on Friday.

Recent fires along the Cape Peninsula had caused significant damage to vegetation at Chapman’s Peak, and a section of the path had been closed regularly due to high winds and threatening rock falls.  “This is not a decision that was made lightly,” said Two Oceans general manager Carol Vosloo. “We are responsible for every single runner on race day, so all decisions were made with this in mind.”

The Ou Kaapse Weg route was last used in 2003 when Chapman’s was closed for construction of tunnels and catchment nets.

While the route for the 56km race had changed, organisers confirmed the R1 million record bonus would still be offered to the first man or woman to break the records held by Thompson Magawana (3:03:44) and Frith van der Merwe (3:30:36). 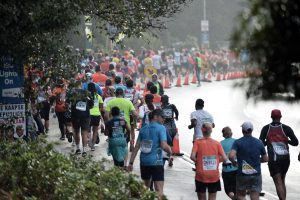