Amateur road runner Hayley Ryan was recovering in intensive care on Monday, after being hit by a car during a race in Boksburg at the weekend.

Ryan was airlifted to Union Hospital in Alberton on Sunday after sustaining multiple injuries, including a broken femur and pelvis. “She had an operation and a skin graph yesterday,” her brother, Andre Ally, confirmed. “The operation went well and she is in stable condition.”

Ryan’s Roodepoort club mate George Niemandt was running a few metres behind her when the incident occurred, and he said the driver had sped off after hitting the 33-year-old athlete with his car. “Two other cars chased him and boxed him in, forcing him to stop. I also turned around and ran after them,” Niemandt said.

Niemandt confirmed there had been cones on the road, cordoning off the runners, as well as marshals directing traffic, and he believed the driver was “100% in the wrong”. Boksburg Athletic Club, organisers of the 32km race, posted a statement on social media, expressing “shock and sadness” in response to the accident.

“We are grateful for the assistance she received at the scene of the accident from all concerned and we wish to thank the running community for their outpouring of support for her,” the club said on Facebook. “Our priority is her well-being and as such we are in close contact with her family.
“We wish our fellow athlete a speedy recovery from her injuries. Our thoughts are with her, her family, her club mates and her fellow runners during this difficult time.”
The club confirmed the matter was under police investigation. 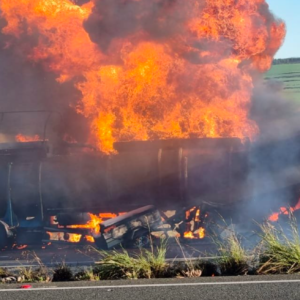 WATCH: Huge blaze on N3 after deadly crash between bus and truck
5 months ago
5 months ago

WATCH: Huge blaze on N3 after deadly crash between bus and truck
5 months ago
5 months ago