SACD’s Karim in a class of his own

The local squash scene has been blessed with an abundance of talent this week with Potchefstroom hosting the prestigious Jarvis Kaplan Cup for the first time. 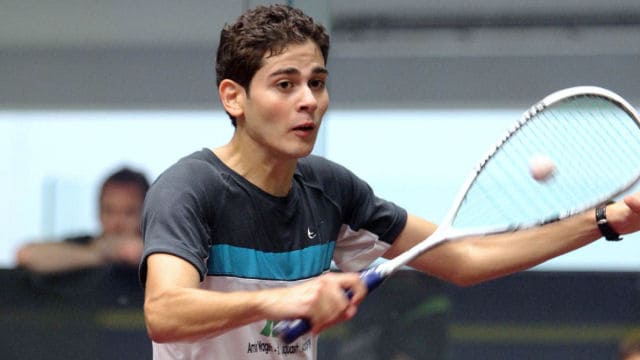 And to top it all, the local SACD team has one of the world’s top players spearheading their challenge.

Egypt’s Karim Abdel Gawad is currently ranked No 14 in the world rankings and judging by his impetus, it won’t be long before the 23-year-old finds himself in the top-10.

Having arrived in the country a few days ago as one of the many imports for this week’s interprovincial tournament, Gawad is enjoying what has been an incredible year.

He has three PSA (Professional Squash Association) titles to his name, the first coming in February when he successfully defended his Pittsburgh Open crown. Gawad followed this up with victory at the Andorra Open in April and just six weeks later, captured the Sharm El Sheikh International on home soil.

It is the second year running that Gawad has been brought in to bolster SACD’s chances. And although, not able to compete with the likes of Western Province, who are aiming for their fourth consecutive win, he has given local crowds something to savour.

He beat WP’s Cameron Pilley 3-2 on Monday in what was a tight encounter. Pilley himself is an import from Australia and is currently ranked 18th in the world, having previously gone as high as No 10.

“It was a very tough match because he is one of the best players on tour,” said Gawad, who won 12-10 in the fifth game. SACD went on to register their first win on Tuesday, beating Border 19-4 with 2011 champions, KwaZulu-Natal next on the fixture list.

Beyond the four walls of a court, Karim has been enjoying his second visit to South Africa. He made his Jarvis Kaplan debut in Cape Town last year.

“It is a very relaxed town,” said the softly-spoken Gawad of the host city.

After flying the flag for the SACD team, Gawad will start preparing for what will be a busy final quarter of the year.

He has his sights set on the China Open in Shanghai in September, followed by the Charlottesville Open in the States just two weeks later. His stellar year will hopefully reach a fitting climax at the World Championships in Bellevue, Washington, from November 15 to 22.

As a prodigious talent, Gawad lists his current all-time highest ranking as one of three major highlights during his career so far. A close second is when he upset world No 4, Miguel Angel Rodriguez, during the Windy Open in March.

His rise is hardly surprising coming from a country which has eight players within the world’s top-20, headed by No 1 Mohamed Elshorbagy.

Gawad believes Egypt’s illustrious history in the sport is due to a number of factors.

“We are a superpower because we have always had very good coaches,” said Gawad.

“As young players we were fortunate enough to have many role models like Ramy Ashour and Karim Darwish. And we always got to practice with them so before we played on tour, we already had plenty of experience.”

His team-mates have also relished the opportunity of having him around.

“He boosts our morale and adds another dimension in terms of playing experience to the team,” said Rudi van Niekerk.

Christo Potgieter went on to add: “It’s amazing to witness his movement on the court as well as his accuracy under pressure.”

For now, the 2013 PSA Young Player of the Year is focusing his efforts on rocketing SACD up the ladder after finishing fourth last year.

The tournament wraps up on Friday.

Travel ban: Answers to your questions about cancelled flights and more
12 hours ago
12 hours ago

Travel ban: Answers to your questions about cancelled flights and more
12 hours ago
12 hours ago