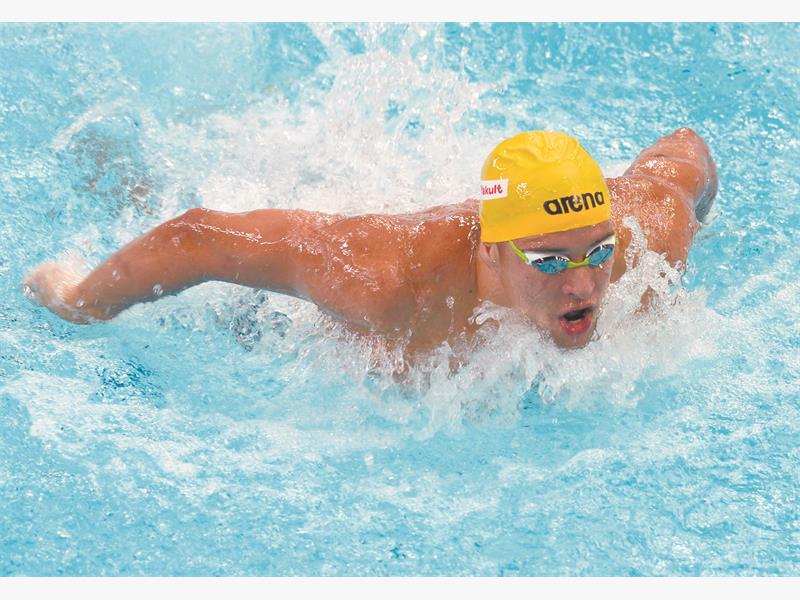 CLEAN SWEEP. Chad le Clos yesterday added the 100m butterfly title to the 50 and 200m gold medals he won in his specialist stroke at the sixth leg of the World Cup series in Singapore. Picture: AFP.

Le Clos, who won the 50m and 200m butterfly finals on Tuesday, improving his own short course world record over the longer distance, added the 100m gold on day two, securing a clean sweep in his specialist stroke.

Lying fourth at the halfway mark, he produced a sterling finish, touching the wall in 50.04 to edge Poland’s Konrad Czerniak by 0.05 seconds.

Fellow South African Myles Brown, who was fifth in the 200m freestyle, grabbed his second medal of the meeting in the 1 500m freestyle event.

Brown won a close tussle against Hungarian Gergely Gyurta to grab gold in 14:56.94.

Veteran Roland Schoeman, who earned two medals on the opening day, struggled in the men’s 50m freestyle final yesterday, narrowly missing out on a podium place.

The world record-holder in the sprint event, Schoeman settled for fourth place in 21.36, finishing one tenth of a second behind bronze medallist Anthony Ervin of the United States.

The penultimate leg of the World Cup will be held in Tokyo this weekend, ahead of the eighth and final meeting in Beijing next week.

Le Clos, who has all but wrapped up the title, is looking for his second overall victory in the annual series after taking the crown in 2011.