While the nation's top male swimmers are expected to carry the team at next year's Rio Olympics, freestyle and backstroke star Karin Prinsloo hopes to bounce back from injury and launch a resurrection in SA women's swimming. 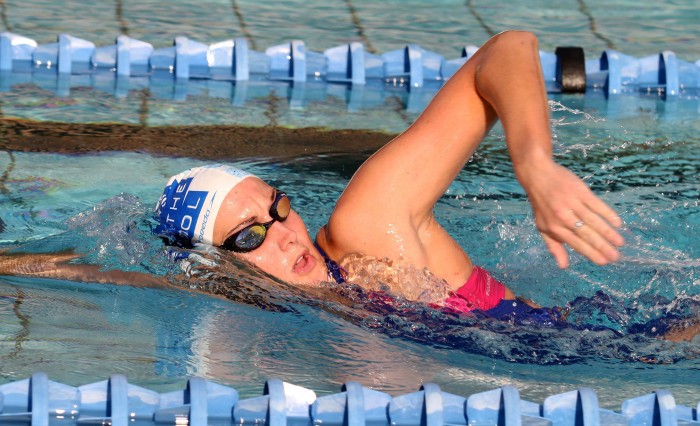 While she is not even considering her medal chances at this stage, Prinsloo is eager to shake off a double knock and regain traction in her promising career.

After having her tonsils removed earlier this year, following repeated bouts of illness, she was hit by a shoulder injury in the latter stages of the 2015 campaign. Despite her troubles, Prinsloo was the only individual finalist of the eight-member SA women’s swimming team at last year’s Commonwealth Games in Glasgow.

At the African Games in Brazzaville last month, she again led the charge, raking in 11 medals.

“My heart is still 100% invested in Rio, and I want to give it everything to qualify for the Olympics, but my body is not responding the way I’d like,” the 25-year-old High Performance Centre (HPC) athlete said on Thursday.

While the nation’s top men have performed consistently well in recent years, raking in medals at major multi-sport Games and global championships, the elite SA women have been left floundering in obscurity.

Three men have bagged five Olympic medals in individual swimming events since the Athens 2004 Games, but no SA woman has earned a medal in the pool since Penny Heyns secured bronze in the 200m breaststroke at Sydney 2000.

In London four years ago, while Chad le Clos and Cameron van der Burgh scooped three medals, Suzaan van Biljon was the only SA woman to reach a final.

At the 2013 World Aquatics Championships in Barcelona, the men raked in five medals, but no woman was able to reach a final. At this year’s global championships in Moscow, further highlighting the gradual decline, there was not a single woman selected in the five-member national team for pool events.

They showed the first real signs of a resurgence, however, at the recent African Games in Brazzaville. The women’s contingent earned 26 of the swimming team’s 52 individual medals (exactly half), and though the competition was relatively poor by international standards, a group of young athletes signalled the possible start of a turnaround.

Leading the way after she showcased her talent at the 2012 London Olympics, where she reached the 200m backstroke semifinals and narrowly lost out on a place in the penultimate round of the 200m freestyle, Prinsloo hoped to bounce back and prove she and her compatriots had the ability to put up a fight against the best swimmers in the world.

Needing to set the qualifying standards in her disciplines (100m and 200m freestyle, and 100m backstroke) at the national championships in April, in order to book her place in the team for the Games, Prinsloo remained confident she could recover in time to find her best form at the trials.

“This year has probably been the toughest of my career, first with being sick and then the injury,” said Prinsloo, who trains with Igor Omeltchenko at the HPC in Pretoria.

“I’m still struggling with my shoulder, but if I manage my training and physiotherapy I’m hoping to be injury free by December.”

Prinsloo confirmed she would compete at the final two legs of the World Cup series in Doha and Dubai next month, competing in four disciplines at each event, and she would use these races to launch her build-up to the national trials.

“I’m going to train through these races because my focus at the moment is to do base work for next year and prepare myself for the SA champs.

“I really want to go to Rio so all my plans at the moment are directed towards qualifying. We’ll take it from there.”