The special day Frith ran the race of her life

A member of the unfortunate generation of athletes who arrived moments too soon, Frith van der Merwe's career peaked just before the veil of isolation was lifted. 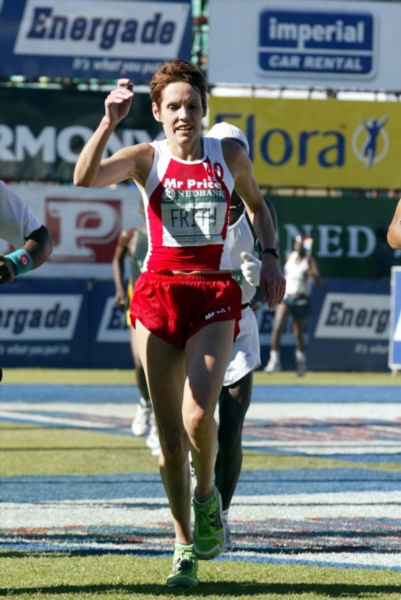 And though she racked up a few impressive performances in international races in the early Nineties, the dainty schoolteacher from Benoni reached her best form a few years earlier, blazing across the booming South African road running landscape with graceful ease.

Over a six-month period in 1989, Van der Merwe recorded some of the most remarkable achievements ever seen on South Africa’s roads.

In February she broke the national marathon record, clocking 2:30:35 at the SA Marathon Championships in Port Elizabeth, and the following month she blitzed the 56km Two Oceans course in 3:30:36 in Cape Town, knocking more than 13 minutes off Monica Drogemoller’s race record.

Just nine weeks down the line, she produced one of the most startling ultra-distance efforts of all time as she finished 15th in the Comrades Marathon in 5:54:43, nearly an hour under Lindsay Weight’s previous mark for the “down” run.

Finally, in August, she grabbed her third ultra victory of the season in another superb time of 3:04:30 at the City to City 50km race, setting an unofficial world best on the downhill course between Pretoria and Johannesburg. She went on to win a total of 50 standard marathons in her career, achieving a best time of 2:27:36 at the 1990 national championships, and finished seventh at the IAAF World Championships in Stuttgart in 1993.

Her Comrades win in 1989, however, stands out as the highlight of a glittering career. Van der Merwe, who had won the “up” run the previous year and went on to win the race a third time in 1991, says she still has fond memories of the day she tore through the field to set a women’s record that still stands 24 years later.

“It was a special day. Everything went perfectly,” Van der Merwe said after she was included in the Spar GSport for Girls Hall of Fame this week.

“I just never got tired, and I was able to absorb the atmosphere along the route.”

She defeated a number of men who had been touted for a place among the top-10.

Johnny Halberstadt, referred to by Bruce Fordyce as perhaps the best athlete to have run Comrades and not to have won, gave Van der Merwe a word of encouragement as she cruised past in the closing stages.

“It was brilliant passing all those male gold medallists,” she said. “But I didn’t know what to say to them. See you later?”

After a stint in Grahamstown, Van der Merwe recently returned to Benoni and next year she will compete in the masters’ category for the first time.

While she still straps on her running shoes regularly, however, she now enjoys the social side of the sport.