Small rise in confirmed number of Covid-19 infections on Saturday, to 1,187

The health minister has offered a comprehensive update on the overall situation in the country, though he says the latest results only reflect testing, not how many cases there may actually be. 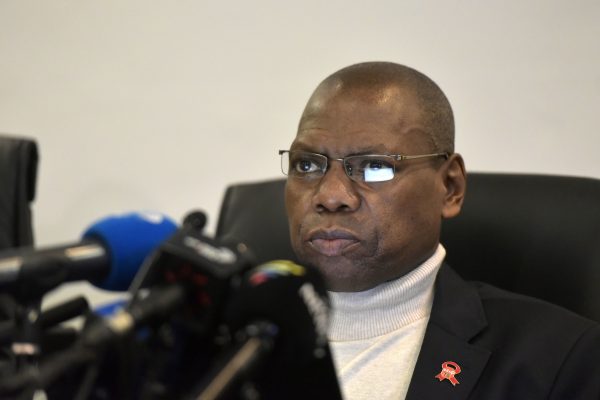 Minister of Health Zweli Mkhize briefs media about South Africa's plans to fight the coronavirus before it reaches our shores, at the Southern Sun OR Tambo in Kempton Park, 1 March 2020. Picture: Neil McCartney

In a media statement on Saturday evening, Health Minister Zweli Mkhize surprised the country by confirming that the confirmed number of cases had only increased by 17 since Friday, to 1,187.

However, he said “we must outrightly state that these numbers do not indicate a reduction in the number of infections”.

“It is merely a reflection of positive results that were received, verified and ready for today’s reporting.” Read the rest of the statement below:

We have noted with concern a number of confirmed COVID-19 cases of health workers who work both in the private and public hospitals. This includes doctors and nurses. We mention this because health workers are in the frontline of this battle. They are exposed not only to their families but to the patients who they are meant to treat.

Some of the confirmed COVID-19 cases that involve health workers are as follows:

All these health workers are in a good medical condition with most of them having mild or no symptoms. It is only one doctor in the Free State aged 70, who is in ICU. It must be emphasised that none of these health workers were infected by patients that they were treating. They came into contact with their family members, friends and other colleagues who had tested positive for COVID-19. All individuals who were identified as contacts of these health workers have been put in quarantine and are being monitored.

We must inform our people that South Africa received a very limited stock of flu vaccines. These are preordered a year in advance. At the time the country (both public and private) placed its orders, we had not anticipated this COVID-19 pandemic. This means that as it stands, our flu vaccines are understocked.

As government we have engaged with the pharmaceutical industry and it became clear that the distribution of this vaccine has to be rationalised and prioritised. We have therefore taken

a decision that health workers in the country will be given priority in receiving the flu vaccine. This is precipitated by the fact that the country cannot afford to have them sick especially as the flu season approaches. This is one of the major lessons that we have learnt from countries that have experienced the COVID-19 pandemic.

We therefore plead for the understanding of all South Africans who may unfortunately not have access to the flu vaccine this year.

We are pleased that South Africa is participating in the Public Health Emergency Solidarity Trial that has been initiated by the World Health Organisation to conduct a clinical trial to find effective treatment for COVID-19.

All participating countries will adhere to the same methodology in order to facilitate the worldwide comparison of unproven treatments. Other countries that have already confirmed their participation in this trial are Argentina, Bahrain, Canada, France, Iran, Norway, Spain, Switzerland and Thailand. The South African Solidarity research team is led by Professors Helen Rees and Jeremy Nel, working with 30 senior academics, researchers and clinicians from eight medical schools in the country (WITS, SMU, UP, UCT, Stellenbosch, NMU, UKZN, UFS, and the SA Military Health Service). They will be undertaking the study in 14 leading hospitals across the country.

Three weeks ago, His Excellency, President MC Ramaphosa bid farewell to our brave men and women from the SANDF, SAA pilots and crew members, and the National Department of Health doctors who were travelling to Wuhan, China to fetch our citizens. As it is known, they returned to South Africa and were staying at The Ranch Hotel, in Limpopo.

We had assured all South Africans that these citizens were all negative, they did not present any symptoms and therefore did not pose any risk of infection. However, we took extra precautions and quarantined them for a 14-day period. On arrival medical screening and COVID-19 tests were conducted. They all came out negative. We are very pleased to report to South Africans that these citizens conducted their second test in preparation for their exit. These have all come out negative. They are therefore being prepared for vacating the Ranch Hotel.

We take this opportunity to appreciate the Limpopo Provincial Government and the people of Limpopo who despite their initial reservation, they came out in full support and assisted us in making this mission a success.

We also thank the Ranch Hotel and all its workers who were prepared to serve our compatriots, despite this pandemic being taboo in our country at the time. They have done a sterling job in making our people feel welcome back at home. This, we sincerely appreciate.