The Indian Institute is the world's largest producer of the Oxford-AstraZeneca vaccine in the fight against against Covid-19. 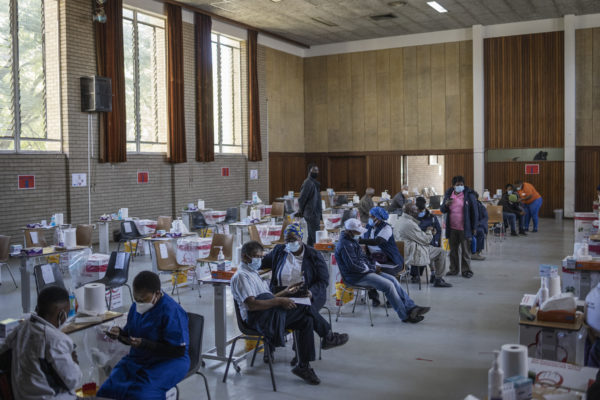 Healthcare workers register people ahead of vaccinating them with Pfizer vaccines at the Bertha Gxowa Hospital in Germiston, on 17 May 2021. Picture: Michele Spatari/AFP

South Africa seems to have dodged a massive Covid-19 vaccine bullet, after the Serum Institute of India (SII) said it wouldn’t be able to deliver vaccine doses to Africa until the end of the year, in a bid to “prioritise India”.

India has been adding roughly as many new Covid cases daily as the rest of the world put together.

The SII is one of the major drug manufacturers tasked with supplying the Covax facility. The facility was set up to maximise the chances of people in participating countries getting access to Covid-19 vaccines as quickly, fairly and safely as possible.

ALSO READ: SA not in Covid-19 third wave yet as vaccine rollout gets underway

Last year, South Africa secured its participation in the facility with a deposit of R283 million from the Department of Health and the Solidarity Fund.

The SII is the world’s largest producer of the Oxford-AstraZeneca vaccine in the fight against against Covid-19.

However, it seems as if South Africa will not be affected by the SII’s decision, because according to Health Minister Dr Zweli Mkhize in April, the vaccine is not in use locally after problems with the efficacy of the Oxford-AstraZeneca vaccines doses, in treating the South African variant of Covid-19.

In February, South Africa asked the SII to take back the consignment of one million doses of the Oxford-AstraZeneca vaccine that arrived in the country, for which it was refunded.

This after the government said it was temporarily halting the rollout of AstraZeneca’s vaccine to healthcare workers after preliminary data from a clinical trial found it gave minimal protection against mild-to-moderate infection caused by the dominant 501Y.V2 variant discovered in South Africa.

South Africa is mostly reliant on the Johnson & Johnson and the Pfizer vaccines. The country did not report an update on vaccinations on Monday as it started Phase 2 of its rollout programme. By Sunday, 478,733 doses had been administered in total.

The SII, in a statement on Tuesday, lamented the strain India was under and said they would not export vaccines “at the cost of the Indian people”.

India has been battling soaring daily infection numbers and a climbing death toll due to lack of ventilators and a country-specific variant of the virus.

India, suffering from one of the worst outbreaks in the world, reported nearly 370,000 fresh infections and more than 3,700 new deaths on Monday.

The devastating wave has overwhelmed India’s healthcare system, and experts have said official figures for cases and fatalities are much lower than the actual numbers.

The situation in India has been worsened by a new more contagious variant and there are fears it could potentially dodge some vaccine protections, World Health Organisation (WHO) chief scientist Soumya Swaminathan said.

Africa not so lucky

Africa is closely following the outbreak in India, for several reasons.

In a potentially huge blow for Africa, there are fears that the Covid-19 variant first detected in India – and which has flooded the healthcare system – could spread rapidly across the continent.

In addition, the Covax programme was set up to help immunisation in poorer nations. Now that that SII will not export vaccines for the rest of the year, many Africans countries have been pushed to the back of the line.

The WHO issued a grim warning on Friday that the second year of Covid-19 was set to be “far more deadly”.

“We’re on track for the second year of this pandemic to be far more deadly than the first,” said WHO director-general Tedros Adhanom Ghebreyesus.

More than 1.5 billion doses of anti-Covid vaccines have been injected into people’s arms around the world, six months after the vaccination drive started, according to an AFP count.

Nearly three fifths of the total have been administered in three countries: China (421.9 million), the United States (274.4 million) and India (184.4 million).

Eleven countries are not yet vaccinating. Six of them are in Africa: Burkina Faso, Burundi, the Central African Republic, Chad, Eritrea and Tanzania.