Mbete has been highly criticised for hijacking the funeral in Verena on Saturday, using the podium to criticise anti-Zuma marchers. 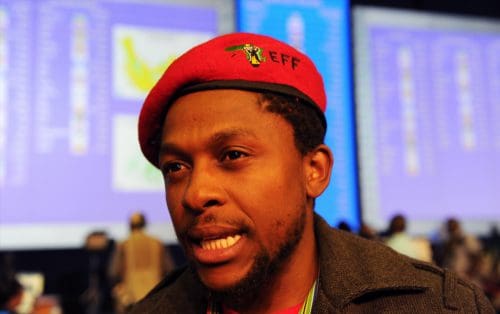 Economic Freedom Fighters (EFF) national spokesperson Mbuyiseni Ndlozi really feels sorry for the woman he could have had a crush on, speaker of parliament Baleka Mbete.

Responding to reports of her saying the ruling party should teach children to avoid toyi-toying, Ndlozi said: “she is hopeless shame”. Though most were “disgusted” with her, Ndlozi feels sorry for her desperate attempts to save the ruling party.

Even Floyd Shivambu commented on the same reports, saying it was the most “disgusting” ANC campaign.

“Baleka uses a funeral of children to defend Zuma and basically speak absolute nonsense about protest. It’s the most disgusting ANC campaign,” he said.

Mbete received criticism on social media after hijacking the Verena funeral to defend the African National Congress (ANC) on Saturday.

In her speech, in isiZulu, Mbete told the mourners that the ruling party would not disappoint Oliver Tambo and Nelson Mandela. The fallen veterans must look down on the ruling party from heaven and be proud that they are doing exactly what they were taught, that when they should keep moving.

“Even if they toyi toyi, even if they know how to do demonstrations, we don’t pay attention to them because all they say is just noise,” she said.

She further commented on those who have been publicly criticising the ruling party, saying they must be taught that if members don’t agree on matters, they should not go outside and tell everyone who’s listening.

“What we do when we don’t get along is to get inside the house, go and fetch the uncles and aunts and sort things out.

Even EFF leader Julius Malema has previously called her a “useless fellow”.