The TV channel showed a picture of the late minister and asked whether he was a victim of conspiracy. 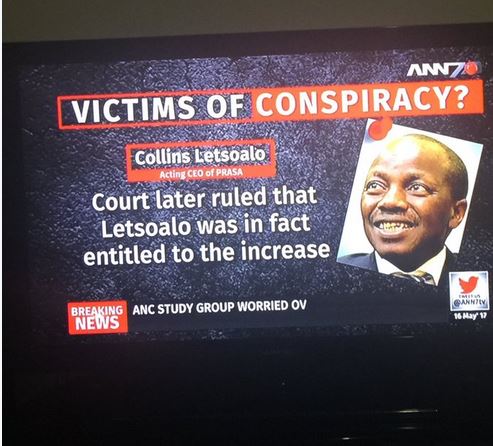 Gupta-owned channel and, according to ANC national spokesperson Zizi Kodwa, “Fox News of South Africa”, ANN7, has received criticism on social media after making another embarrassing blunder on Tuesday night.

The channel was reporting on acting Prasa CEO Collins Letsoalo, asking whether he was a victim on conspiracy.

The Pretoria High Court in April ruled that Letsoalo, who was fired in February by the board from his position as acting group CEO for increasing his salary by 350%, was in fact entitled to the increased amount of R5.9 million.

The board’s firing of Letsoalo was seemingly the trigger that led to former transport minister Dipuo Peters’ decision early in March, to remove all but one member of the board four months before the end of its term, a decision which was later set aside on the basis that it was irrational and unreasonable.

This is basically what ANN7 was reporting on, that Letsoalo may have been a victim of conspiracy, only that they used a picture of late public service and administration minister Collins Chabane.

@Sentletse please help. Who is on this picture ? Our late Minister.???? pic.twitter.com/sOvJT1cR97

Chabane died in a car crash on the N1 Polokwane in March 2015. He died instantly with his two protectors. In his honour, a new municipality in Limpopo has been named after him.

But ANN7 is not the only news channel that has made such blunders. Cases of mistaken identity have been on the rise on our television screens, and Democratic Alliance (DA) leader Mmusi Maimane has also been a victim.

The SABC has once used his picture and called him an ANC leader.