The greatness of one Professor Prathamanthan Naidoo could not escape the portfolio committee members even if they tried. 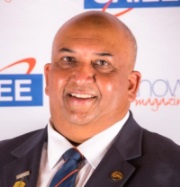 During Tuesday’s special sitting of the public enterprises committee to put Eskom’s reappointment of Brian Molefe under the microscope, one character almost stole the limelight until visibly agitated MPs reined him in.

Chairperson Zukiswa Rantho concurred with MPs’ request that other Eskom board members other than Dr Ben Ngubane, the chair, be given the opportunity to respond to questions raised.

And Dr Pathmanathan Naidoo, introduced as Dr Pat Naidoo by the minister, was equal to the task – in more ways than one. He had a whole lot of personal anecdotes to share with the committee.

Naidoo immediately launched into a self-praising soliloquy, reading out his biography to members. Unfortunately, the indulgence had very little to do with the question the MPs were asking.

To their credit, parliamentarians were patient with tales the distinguished professor of research in sustainable development regaled them with. But their self-restraint was understandably short-lived.

Floyd Shivambu was the first committee member to show his exasperation. “We don’t need your biography, tell us about your relationship with the Guptas,” the EFF deputy president told the learned professor, who managed to evade the request.

But he could not escape the rage that came from a frustrated Mondli Gungubele.

“Sir, we are not averse to you telling us how great you are. But you are simply not answering the questions we are asking.”

Rantho, later given a round of applause by MPs for running a tight ship during the temperamental meeting, was at first accommodating. When she asked him for the second time to stop waxing lyrical about his own achievements, the “fellow” of the South African Academy of Engineers and the South African Institute of Electrical Engineers simply continued telling parliament he was the best.

“Mr Naidoo, we have a lot go get through. After we adjourn the committee, we will still have to caucus, and we have a budget vote to attend in the afternoon,” Rantho said.

Instead of addressing himself to the committee about whether Molefe resigned or was on extended leave, the “registered professional engineer and a specialist consultant in electrical energy and power systems” launched into a masterclass on mining engineering and geology.

“Chairperson, I don’t think this board member is helpful to this committee. Can we please move on to someone else?” a committee member respectfully submitted, and Rantho finally relented. Naidoo was dismounted.

Even at this point, Naidoo was still paging through his voluminous file of papers, seemingly unfazed that the stoic members of parliament would simply not give him unlimited time to drive a fundamental point home – he is simply the creme de la creme, and Eskom is so lucky to have him aboard.

If you want to be inspired to greatness, Naidoo’s profile is omnipotent on the interwebs – that is if you are interested in finding out how great he is.