The East Rand man maintains he is an honest businessman, and that the theft associated with the colour of his van is purely coincidental. Geoffrey Sutton (43) serves ice cream, not crime. “I can’t afford to paint my van a different colour,” he said, after allegations that an ice cream man, also in a green van, stole a resident’s wheelie bin.

This, after he read an article where a Kempton Park resident claimed an ice-cream man driving a green van stole her wheelie bin, Kempton Express reports.

“It was very disappointing to read the article,” Sutton, who drives a green ice-cream van, told Kempton Express.

He has been selling ice cream, chips and lollipops in Kempton Park, Benoni and Boksburg since last year August.

“I felt more information needed to be given about the vehicle because we are a lot of guys that do this.”

A worried Sutton insisted he could not afford to paint his van a different colour just because someone else decided to serve crime instead of ice cream.

Annetjie Labuschagne, 40, who lives on the corner of Jacaranda Street and Highveld Road, told Express on Monday she arrived home to find her bin was missing. A teenager who witnessed the event said a man put the bin into his van, garbage and all, and drove off. Unfortunately, the youngster didn’t have more information. 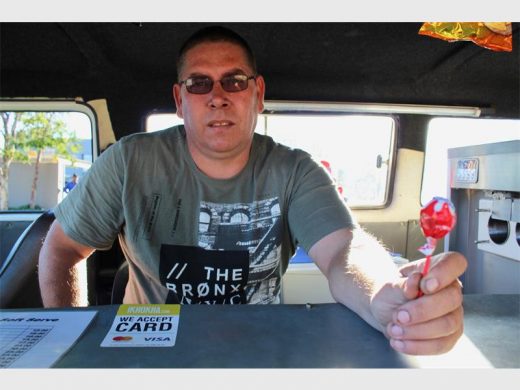 This ice cream man has been selling lollipops, chips and ice cream since August last year. He says the real wheelie bin thief is giving honest salesmen like him a bad name.

“It’s sad for us guys who make an honest living out of this,” Sutton says. “I get lots of compliments from my customers, as I go out of my way to keep them happy.”

This ice-cream man, who drives his route from 11am until 4pm in winter, says his van can be distinguished through the generator on the back, an image of Shrek on the door and its low roof.

After speaking to Kempton Express, this honest ice-cream man drives off in his van, with a familiar ice-cream tune playing over its speaker. No wheelie bin can be seen at the back of the van, but only heaps of treats for sale.