Residents are urged to leave the baboon alone, not confront him, as well as to report his location. 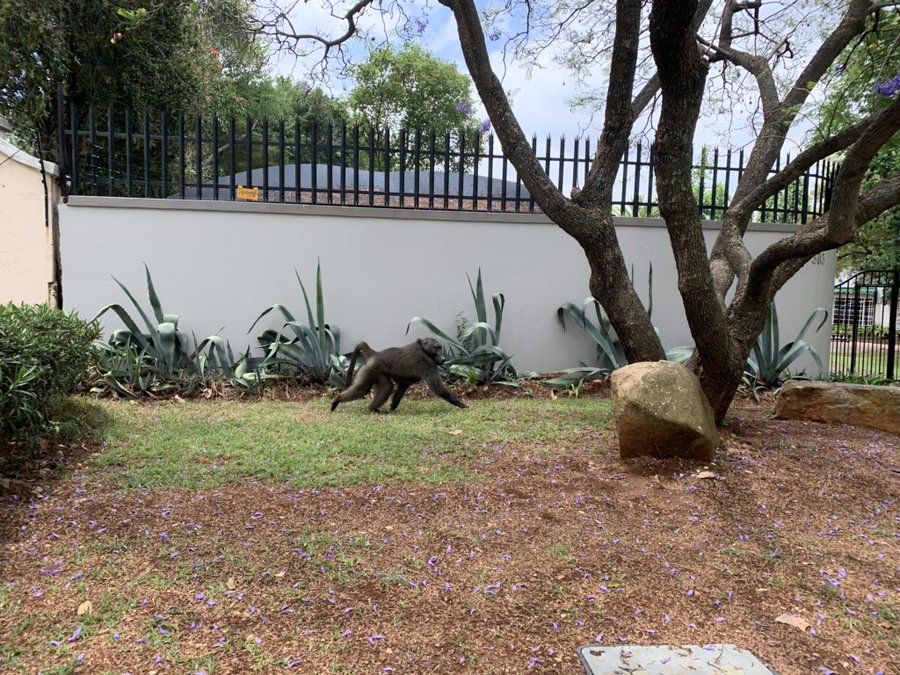 A male baboon is roaming the streets and suburbs of northern Johannesburg and has so far been spotted in Bryanston, Fourways and, more recently, Sandton.

Residents have been reporting sightings of the baboon since Saturday, and he has been spotted along Witkoppen Road and the N1 highway, as well as in residential complexes, parks and gardens in the area.

Animal organisations, such as Community Led Animal Welfare (CLAW), Wild Serve, and the SPCA, are tracking the baboon’s movements and will attempt to trap it and release it into the wild.

In the meantime, members of the public have been asked to report sightings and not confront or attempt to capture the baboon.

On Monday morning, CLAW’s Cora Bailey told News24 the baboon had last been spotted in the Sandton area.

“These incidents happen quite often and largely because of rapid urbanisation that these animals become visible.

“Male baboons and vervet monkeys often leave their troops – sometimes up to four times in their lives,” Bailey said.

They then seek to join other troops, which can take months.

“It is becoming increasingly difficult for them to do what nature dictates. If they didn’t migrate, it would lead to inbreeding. So they do it to ensure genetic diversity,” Bailey said.

Bailey said trying to capture the baboon would be “ridiculous”.

Darting is also not an option.

“A darted baboon will climb on a roof or into a tree before the tranquiliser takes effect, or run into traffic or into a garden with vicious dogs. It would more than likely be a death sentence. Darting can only be done in exceptional circumstances.”

According to Bailey, the baboon should ideally be left alone and not confronted.

“In some areas, he might be viewed with great superstition and could likely be killed in a brutal way.

“If we find that he is going back to the same place more than once, we will attempt to trap him and relocate him to an area where he will have a chance of finding another troop to join.”

Because the animal is moving around so rapidly, it is extremely difficult to keep track of him.

“To anticipate where he is going to go next is impossible.”

Bailey urged people not to panic.

Dirk Engelbrecht, director at Wild Serve, said the baboon was moving swiftly and did not appear to be slowing down.

“We have eyes on the animal and everyone is on standby.”

Engelbrecht said it was sad that animals had to make their way through urban areas.

“If we had the space and corridors, they would be moving more freely. But we keep closing them in.”

Engelbrecht also urged residents to leave the baboon alone and not to confront it.

“People have been heeding that advice. Right now, the animal is moving and it hasn’t been given a reason to turn back or been thrown off course. It hasn’t been distracted or cornered.

“The next step will be to find an ideal location [to trap the baboon]. We can’t just trap it anywhere. We need to consider the risks around people and the animal.

“First the animal needs to slow down and settle. Then we’ll assess the risk and set the trap in a suitable location. Once we have trapped the animal, we will hold it temporarily at a rehabilitation centre and then it will be released,” Engelbrecht said.

Bailey asked that anyone who spots the baboon sends a WhatsApp message with the location to 076 850 4466. No calls will be accepted.

Residents have taken to social media, sharing videos and pictures of the baboon.

A baboon was spotted in Bryanston! What is a frickin baboon doing in Gauteng. This, must be either someone's pet or we have exotic animal smugglers doing their thing, again. pic.twitter.com/2By7F6itI1

Large male baboon running down Bryanston Drive towards the river area! Went over the gate into someone’s garden. Please be careful if you see him and be kind. Joburg Wildlife say this is normal for them to move between green belts! @PigSpotter pic.twitter.com/0HZhKOeaEn

@PigSpotter @NSPCA_SA looks like our friend has made his way to Sandton. Please tag Joburg Wildlife, the baboon has been outside our premises for over an hour pic.twitter.com/cNfvf8fBK9

I love South Africa. There is a wild baboon running through Fourways suburbia. Here he is pictured at a house just up the road from me. #baboonontheloose pic.twitter.com/6xWifUc3Hm

The poor baboon on the run in Joburg has been seen heading towards Delta Park. Read more about it here. @CityofJoburgZA @JoburgParksZoo https://t.co/rPMWUvH2wz pic.twitter.com/mWalAQJDyg