DR Congo home to a tenth of the world’s languages

When the former Belgian colony became independent in 1960, authorities chose French as the official language, though even today not all of the population understands it. 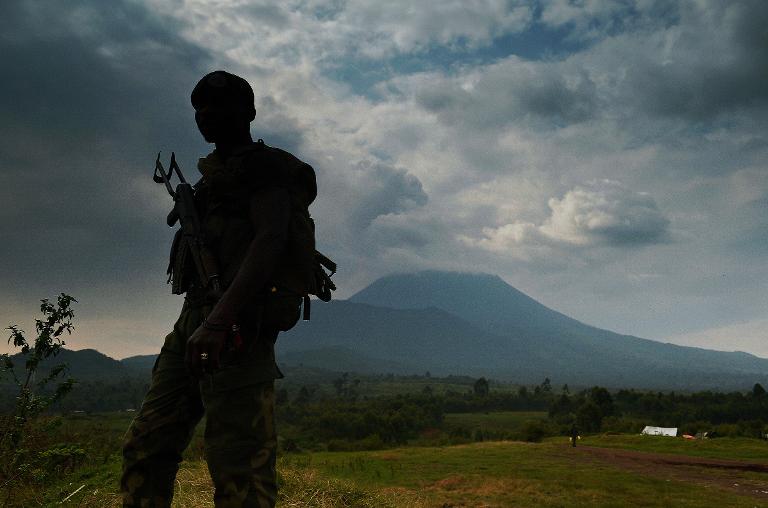 A soldier from the Democratic Republic of Congo regular army (FARDC) stands guard in Kibati near Goma, with the Nyiragongo volcano in the background, on September 4, 2013

“I haven’t once spoken my mother tongue Kilokele in the 62 years I’ve lived in Kinshasa. None of my nine children speak it,” says Charles Tongohala.

Tongohala’s native tongue is one of 450 spoken in the Democratic Republic of Congo, a sprawling nation of 71 million people whose lingos — almost all of them spoken, not written — account for nine percent of the world’s 5 000 languages.

He was a boy when he moved to DR Congo’s capital from a northeastern village home to the Lokele fisher people, who live along the banks of the giant Congo river and speak Kilokele.

Mukebayi and his wife taught their 10 children Tshiluba, and he recalls that in 1974 his son Michel spoke it perfectly though he was only four.

“But now that he’s married and has his own family he never speaks his own language and his children only know how to speak French and Lingala,” the language commonly spoken in Kinshasa, a teeming city of 10 million.

When the former Belgian colony became independent in 1960, authorities chose French as the official language, though even today not all of the population understands it.

Later on, during an official “return to authenticity”, the authorities promoted the use of four “national” languages for primary schooling — Lingala (a language used by the army and in Kinshasa and the northwest), Kikongo (west), Tshiluba (centre) and Swahili (east).

Those languages are also used in regional courts and cohabit with French in some media.

But Lingala and Swahili, which are also spoken in neighbouring countries, are far more widely used today than the other two.

In 2000 French linguist Claude Hagege warned in a book that pushing regional languages, such as Swahili, over lesser-known tongues could wind up killing minor indigeneous languages.

Take the wife of Mukebayi’s son Michel, Cocotte Kolo. She was also born a Luba but can’t speak Tshiluba; she is fluent in Swahili, Kinyarwanda (spoken in Rwanda and eastern DR Congo), Lingala and French.

– The rich stick to French –

While some people like her speak several local languages, the upwardly mobile will often teach their children only French — or French and English.

The death of a language “is due to the rural exodus and the demographic, economic and cultural weight” of its speakers, said linguist Kadima Nzuji of Brazzaville’s Marien Ngouabi university.

So while there are relatively few speakers of Kinande and Kitetela, both have a good chance of survival because they are spoken by a dynamic trading community, he said.

Kambayi Bwatshia, who lectures in history at Kinshasa’s UPN university, said “old people speak in the language of the village to survive” while young people, “especially in big urban centres, adapt to their environment.”

Hailing the work of the Christian missionaries who chronicled local languages from the 19th century on, both academics said the documents they penned would soon be all that remained of dying minority tongues.

Years of war and poverty too have contributed to the disappearance of some of Congo’s least spoken languages — the backdrop to John le Carre’s 2006 spy novel “The Mission Song”, which centres on an interpreter of the country’s dying tongues.

“When you could travel home to the village on the boats I’d be able to speal Kilokele with people from my generation,” said Tongohala.

But that was more than a quarter-century ago.