Close by a narrow, rickety bridge in Kenya's central Laikipia highlands two herders sit on blistering hot rock next to the muddy trickle of the Ewaso Nyiro river to explain why they routinely break the law, invading private land to graze their cattle.

“The reason we go there is not to grab the land, we go for pasture, nothing else,” says Lemerigi Letimalo, a 28-year-old Samburu herder in a Manchester United T-shirt with a mobile phone hanging in a pouch around his neck.

“The white settlers are the ones who call the police forces to attack us,” he adds.

A government-ordered security operation has so far failed to quell the unrest, which some blame on drought and others on politics. Accounts of the attacks are widely divergent.

The victims of the incursions are mainly black Kenyans living on small patches of farmland as well as white landowners, whose properties often run into the tens of thousands of acres (hectares), dredging up long-festering resentment over land ownership.

The March murder of British rancher and former soldier Tristan Voorspuy and the April shooting of Italian author and conservationist Kuki Gallmann are among the most high-profile acts of violence. Too many people with too much livestock have rendered Laikipia’s rangeland unliveable for the growing population, exacerbated by climate change.

But the young Samburu “morans” — the warrior age set that ends with marriage — sitting by the river at Crocodile Jaw Bridge on a recent Wednesday consider that they are the victims: of weather, of greed and selfishness, and of state violence.

They say poor rains have forced them to cut fences in search of grazing land, accusing ranchers, farmers and conservationists of protecting their own livelihoods at the pastoralists’ expense. They also accuse security forces of unfairly targeting them.

“When we go grazing in there we get attacked by the police. We don’t go in there for war or planning to stay, we just go in to graze until there are rains back at home,” Letimalo tells AFP, offering a rare insight into the Samburu herders’ side of the story.

He admits to illegally grazing the 50 cows and 200 goats that he is responsible for on other people’s lands and says police have shot dead two of his cows.

But Letimalo recognises neither the term “illegal herding” nor the law itself, which he describes as “for the landowners”.

“When there’s drought, a fence means nothing to me,” he says, speaking in the local Samburu language. “We blame the whites for bringing the police who attack our cattle and kill our people.”

Fellow herder, 30-year-old Lokimaniki Lekaal, agrees: “Despite the law, we have no option. We cannot sit around and watch our animals die of hunger.” Violence has spiked in Laikipia this year, with smallholder farms and huge ranches alike invaded by armed herders.

A glance at an aerial view of Laikipia shows the stark difference between the green of well-managed, fenced-off private land and the dust bowl free-for-all of the over-grazed rangelands.

Too many people with too much livestock have rendered the rangeland unlivable for the growing population, a situation exacerbated by climate change.

But in the immediate struggle for survival, talk of long-term planning or better land management is a luxury Lekaal dismisses. “When all the grass is finished we will die. It is up to God,” he says. Until then he will keep his cattle wherever grass can be found.

The two men insist that drought is the reason they herd livestock onto private land and deny any suggestion their actions are politically motivated as Kenya heads towards a general election on August 8. 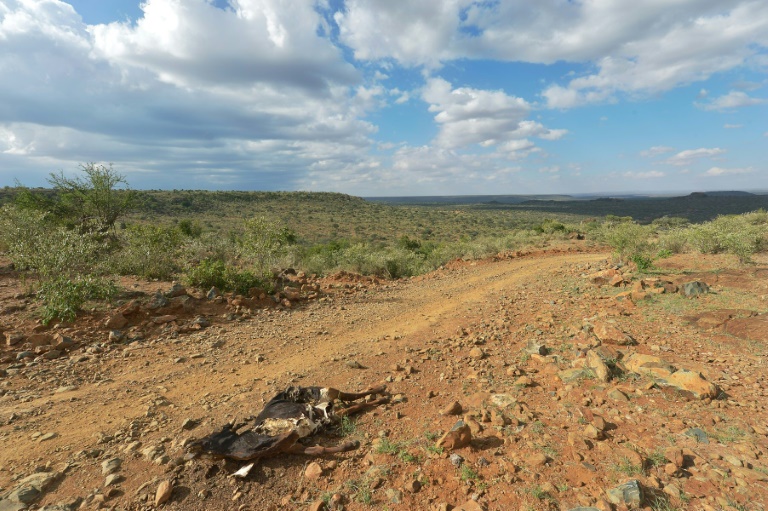 Two Samburu cattle herders say drought is the reason they herd livestock onto private land and deny any suggestion their actions are politically motivated as Kenya heads towards August 8 elections.

“There’s no leader who has influenced us to go to graze in someone’s land, it is we, ourselves, that decided to go and graze our animals inside the ranches,” Lekaal says.

Nevertheless, local MP Mathew Lempurkel, a Samburu, has been charged with incitement over the murder of Voorspuy, while a politician in neighbouring Baringo county was similarly charged over arson attacks on Gallmann’s estate before his own murder in May.

Some invaders in Laikipia have been photographed wearing Lempurkel campaign T-shirts. The MP himself, facing a tight election, has both denied the charges against him and used them to burnish his credentials as the champion of pastoralist interests.

Moran culture plays a part too.

Young, unmarried and often uneducated — neither Letimalo nor Lekaal went to school — the herders revel in aggressive displays of machismo and pride themselves on not backing down from a fight. “We don’t fight twice,” as Letimalo puts it.

Landowners and herders alike complain that a late and half-hearted government security response has made matters worse.

The herders also say their acts of retaliatory arson and violence are provoked by the security forces.

“There’s a time we set property on fire but that was because one of our colleagues was killed,” says Letimalo. “We had no option but to burn the property. It’s not as bad as killing someone!”

“We are the only ones suffering,” adds Lekaal.