Meanwhile, a host of smaller opposition parties wrote to Johnson to call for Cummings to be fired. 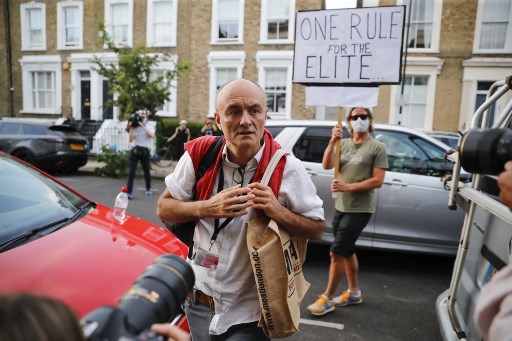 Number 10 special advisor Dominic Cummings arrives home in London on May 25, 2020, after giving a press conference answering allegations he and his family broke the rules when they travelled from London to Durham while the nation was under full-lockdown to curb the spread of Covid-19. Picture: Tolga AKMEN / AFP

British Prime Minister Boris Johnson’s government was hit by its first resignation on Tuesday over the controversy surrounding his top aide Dominic Cummings’ cross-country trip during the coronavirus lockdown.

Undermining attempts by ministers to move on from a crisis that has dominated British politics for days, Douglas Ross, a minister for Scotland, quit in protest.

“I have constituents who didn’t get to say goodbye to loved ones; families who could not mourn together; people who didn’t visit sick relatives because they followed the guidance of the government,” he said in a statement.

“I cannot in good faith tell them they were all wrong and one senior advisor to the government was right.”

The government said it regretted his decision.

The resignation will pile more pressure on Cummings, who held a press conference on Monday to justify driving his wife and young son on a 425km trip from London to Durham in the northeast of England during the height of the coronavirus crisis.

Cummings said he had virus symptoms around the time of the trip and his wife was also suffering from Covid-19.

The Brexit campaign mastermind explained he wanted to drop off his four-year-old son at his parent’s house in case both he and his wife became incapacitated.

But many in Britain remain unconvinced.

A YouGov poll taken after Cummings’ press conference found that 59 percent of respondents thought he should resign, up from 52 percent.

More than two-thirds — 71 percent — thought he had broken the government’s lockdown rules.

Hours after Ross resigned, Jackson Carlaw, the leader of Johnson’s Conservatives in Scotland, said the British prime minister’s most trusted adviser should think about quitting.

“Given the furore, given the distraction this is… if I were Mr Cummings I would be considering my position,” he told STV News.

Meanwhile, a host of smaller opposition parties wrote to Johnson to call for Cummings to be fired.

“There cannot be one rule for those involved in formulating public health advice and another for the rest of us,” the Scottish National Party, Liberal Democrats, Plaid Cymru and others said in the letter.

The main opposition Labour party has stopped short of backing that call but demanded an internal government inquiry.

Dozens of Conservative lawmakers have also called on Cummings to quit.

Mark Pawsey said he had acted “against the spirit of the lockdown” while William Wragg tweeted that the government was throwing away “political goodwill” over the scandal.

But cabinet heavyweight Michael Gove defended Cummings, arguing the controversial aide had not broken the law.

Gove said Cummings had acted reasonably in driving from London to Durham and then taking a separate journey to a local beauty spot, Barnard Castle, to — as Cummings claimed — test his eyesight.

Much of the fury in Britain has focused on Cummings’ decision not to apologise for his actions, and claiming that he was being misunderstood because many of initial UK media reports about his travels were false.

He also resisted calls to resign, telling reporters he acted “reasonably and legally”.

Johnson’s spokesman said on Tuesday that “from the PM’s point of view, he has set out that he believes Dominic Cummings acted reasonably, legally and with integrity and care for his family and others”.

Also on Tuesday, the Office for National Statistics said the number of deaths in Britain involving the coronavirus had risen above 46,000, far higher than the 36,914 deaths officially confirmed in the government’s count.