US officer charged with murder over unarmed black man’s death

Derek Chauvin is one of four officers fired after an explosive video emerged showing him kneeling on the neck of a handcuffed George Floyd for at least five minutes on Monday. 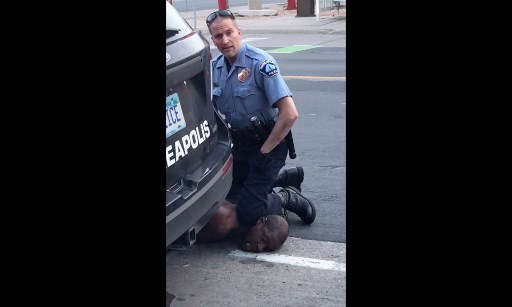 The Minneapolis police officer accused of killing an unarmed African American man was arrested and charged with murder on Friday as authorities sought to restore peace after three nights of violent protests left parts of the city in flames.

Derek Chauvin is one of four officers fired after an explosive video emerged showing him kneeling on the neck of a handcuffed George Floyd for at least five minutes on Monday.

“This case is now ready, and we have charged it,” said county prosecutor Mike Freeman amid outrage over the latest death of an African American at the hands of the police.

Freeman said the three other officers were under investigation, and that he anticipated charges.

The announcement came hours after hundreds of troops were deployed to the streets of Minneapolis and St. Paul to stem what would be a fourth night of violent protests.

Scores of buildings have been burned and looted across the so-called Twin Cities, including a police station associated with the four officers.

As President Donald Trump labeled the protesters “thugs” and threatened a harsh crackdown, Minnesota Governor Tim Walz warned that he was considering a curfew.

“This is volatile. This has been building for decades,” he said of tensions between police and African Americans.

“The first task at hand is, get civil control back, and get justice moving quickly and fairly.”

Barack Obama, the country’s first black president, said on Friday he shared the “anguish” of millions of Americans over 46-year-old Floyd’s death.

Obama’s former vice president Joe Biden, who is running for president, called for justice for Floyd and said it was time to heal the “open wound” of systemic racism in the United States.

But Trump lashed out at local officials for letting protests get out of hand and threatened a violent federal crackdown.

“These THUGS are dishonoring the memory of George Floyd, and I won’t let that happen,” Trump tweeted.

“Just spoke to Governor Tim Walz and told him that the Military is with him all the way. Any difficulty and we will assume control but, when the looting starts, the shooting starts.”

The post sparked an angry pushback from critics who interpreted it as an incitement to violence, although Trump later denied this was his intention.

Officials in the Twin Cities and across the US were bracing for more violence on Friday after protests broke out in New York, Louisville, Memphis, Denver and Phoenix.

“People are angry they are frustrated because this is not the first police killing they have seen around the country,” civil rights activist Al Sharpton told MSNBC.

“The tape is more than enough to establish probable cause… to make an arrest. There is no reason these four policeman have not been arrested by now.”

Freeman said that, even with the video as evidence, his department was required to build an airtight case before making arrests.

“We have a difficult burden of proof. We entrust our police officers to use a certain amount of force,” he told reporters.

Excessive force had to be established “beyond a reasonable doubt,” he added.

Chauvin and his three colleagues are under investigation by the FBI and the Department of Justice for federal crimes, specifically civil rights violations that, because a death was involved, could bring life in prison.

“The Department of Justice has made the investigation in this case a top priority,” Erica MacDonald, the US federal attorney for Minnesota, said on Thursday.