Scientists have unveiled the contours of an ancient city north of Rome for the first time, and all they needed was a quad bike and a radar gun. 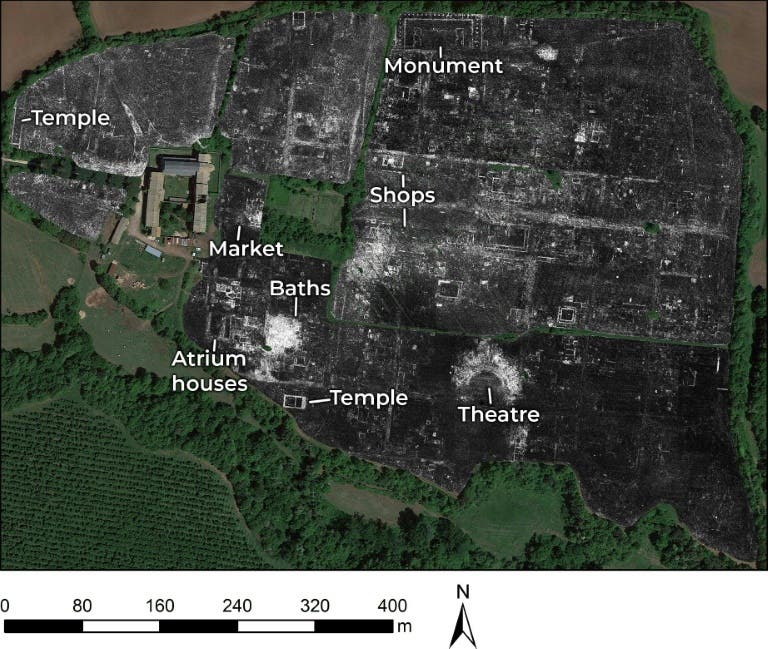 The splendour of long-buried Falerii Novi in the Tiber River valley was revealed without overturning a single stone. University of Cambridge/AFP/File/Handout, L. Verdonck

The splendour of long-buried Falerii Novi in the Tiber River valley was revealed without overturning a single stone.

The results, published Tuesday in the journal Antiquity, shed light on aspects of Roman architecture and urban design about which relatively little was known.

It was also the first time the ground penetrating radar technology — called GPR — has been used to map an entire city, Professor Martin Millett, one of the authors of the study, told AFP.

“It just gives you a fantastically high-resolution picture of what’s [below the surface],” Millett said. “What the radar does is it enables you to see what’s going on at different depths.”

Traditional excavations and 2-D mapping techniques such as magnetometry have, of course, yielded many clues as to what Roman cities looked like, but they are not able to get a bird’s eye view of how they were laid out.

Falerii Novi — a stone’s throw from modern-day Rome — has been buried underground for around 13 centuries.

About a quarter of a square kilometre (one-tenth of a square mile) in area, the town is thought to have been founded in 241 BC and was inhabited until early medieval times, around 700 AD.

The 3-D images the researchers obtained show a number of temples, public administration buildings and a bath complex, as well as a columned passageway thought to be a public monument.

Much smaller than neighbouring Rome, Falerii Novi’s layout was nonetheless “more elaborate than would usually be expected in a small town,” the authors noted.

The GPR mapping also revealed a complex system of water pipes not too different from those in modern cities.

“You can see there’s a water supply system that must have been laid out very early in the development of the city,” he said. “What that’s telling us about is not just water, but about how the plan of the city was conceptualised.”

GPR could help researchers map a number of additional ancient cities, without having to dig up fields or disturb urban structures built on top of them.

“Cities were essential to the way [the Roman Empire worked], but the number of cities that we fully understand, you can count on the fingers of one hand,” Millett said.

He said that the new technique could also be used to examine larger sites such as Miletus in Turkey, Nicopolis in Greece, or Cyrene in Libya.

In the meantime, the scientists are poring over the images from the Falerii Novi mapping to learn more about the ancient town, a process that could take several months due to the enormous amount of data they accumulated.

What's in a name? The meaning behind tonight's full Harvest Moon
4 weeks ago
4 weeks ago
PREMIUM!

What's in a name? The meaning behind tonight's full Harvest Moon
4 weeks ago
4 weeks ago
PREMIUM!