Amazon plans to set up a 38,000-square-metre facility in the small southern town of Fournes near Pont-du-Gard, a World Heritage site. 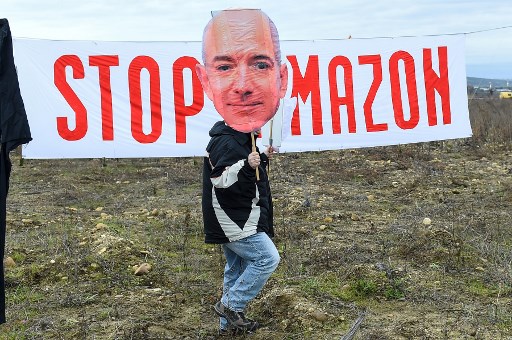 An activist of the Attac association holds a cutout sign depicting Amazon CEO Jeff Bezos, in front of a banner reading "Stop Amazon", during a demonstration on the site where Amazon plans to build a 38.800 square metres warehouse, in Fournes, southeastern France on January 30, 2021. (Photo by Sylvain THOMAS / AFP)

Hundreds rallied in several French towns and cities Saturday in protests called by anti-capitalist and environmental groups against Amazon, including at one site where the US e-commerce giant plans a massive warehouse.

Amazon plans to set up a 38,000-square-metre (400,000-square-feet) facility in the small southern town of Fournes near Pont-du-Gard, a World Heritage site.

Between 800 and 1,000 people rallied at the site, planting shrubs in front of huge banners reading “Stop Amazon” and “Not here or anywhere.”

They formed a human chain to show the size of the project, while multicoloured balloons floated 18 metres (60 feet) up to indicate the height of the planned five-storey facility.

“It’s two years that the citizens of Fournes and its surroundings have fought against the installation of a giant Amazon warehouse,” said Raphael Pradeau, spokesman of French citizens’ activist group Attac.

“At the start they were a bit alone against everyone, but they have succeeded in halting the project thanks to legal recourse.”

“We want to show that these are not small isolated fights and that we can mobilise hundreds of people who are ready to return to stop the work”, said Pradeau.

Sarah Latour, 38, came with her two sons aged 8 and 6, who planted a shrub in waste ground, where vines had once grown.

“These plants, these shrubs that we are planting today are a symbol of life that contrasts with the concretisation that Amazon practices, she said.

“I came with my children because I don’t want this destructive model for them.”

About 200 people also rallied outside an Amazon facility in Carquefou, a suburb of the western city of Nantes, organisers said.

“We condemn Amazon for destroying more jobs than they create,” said Sophie Jallier, a spokeswoman for the organisers in Carquefou.

Other protests were reported in the eastern towns of Ensisheim and Augny.