The Lone Star State became the fifth to rescind its face covering order in a sign of increasing optimism about the pandemic in the US - the world's hardest hit country. 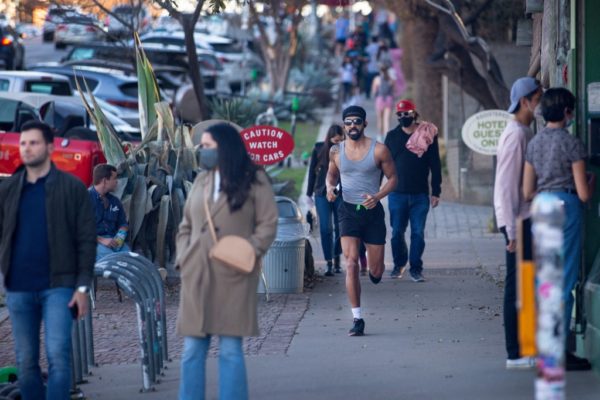 Houston – Texas lifted its mask mandate and capacity restrictions on restaurants and other businesses Wednesday, despite experts warning the “100 percent” relaxation of coronavirus curbs will exacerbate the spread of worrying variants.

The Lone Star State became the fifth to rescind its face covering order in a sign of increasing optimism about the pandemic in the world’s hardest hit country, where the infection rate has been falling since January but still remains high in absolute terms.

The immunisation campaign is continuing to gain momentum, with 93 million people so far receiving one or more doses, as Alaska became the first state to open up the shots to anyone aged 16 or over.

A senior administration official said President Joe Biden plans to acquire 100 million more vaccines from Johnson & Johnson, giving the United States surplus capacity as it targets having enough vaccines for all adults by May.

“This must end,” said Texas Governor Greg Abbott when he announced his plans to ease restrictions last week. “It is now time to open Texas 100 percent.”

Kade Phillips, a 22-year-old in downtown Houston, told AFP he supported the decision.

“I think it’s good for everyone to be able to make their own choice and what they choose for their body,” he said.

But businessman Omar Abu-Shaaban called the move politically motivated sop to the governor’s anti-science Republican base.

“I don’t think he had the health of the people in mind,” he said.

Private businesses can continue to set their own restrictions, and local jurisdictions can keep the order in place on municipal property. A federal mask order also remains in place.

Some 525,000 Americans have died from Covid-19 but while cases have declined dramatically since the January 11 peak, the infection rate has been plateauing since the last week of February at around 60,000 new cases per day.

“The number of cases, hospitalizations, and deaths still remain too high and are somber reminders that we must remain vigilant as we work to scale up our vaccination efforts across this country,” said Centers for Disease Control and Prevention (CDC) director Rochelle Walensky during a briefing.

ALSO READ: Here’s a list of countries with travel bans on South Africa

Peter Hotez, a professor and dean of the Baylor College of Medicine, tweeted he was worried about a “perfect storm” coming to Texas with the lifting of the mask mandate, one of the lowest vaccination rates in the country, rising cases of the B.1.1.7 variant first seen in Britain, an uptick in the test positivity rate and spring break.

But the state will keep its mask order in place.

Iowa, Mississippi, Montana, North Dakota have all lifted their mask orders, while Alabama and Wyoming have set expiration dates on theirs, according to a tracker maintained by health advocacy group AARP.

Hotez described the moves as a “national race to the bottom” adding that while the US doesn’t have enough vaccines yet, it will in two months’ time.

“We don’t have to needlessly lose American lives in the spring of 2021,” he said.

While scientists have cautioned that a fourth spike might be on the horizon, they also believe it won’t be as deadly as previous surges as some of the most vulnerable, either because of their age or preconditions or their exposure levels, have been vaccinated.

New York is making vaccines available to people aged 60 and over, while Florida will follow on March 15.

Those who have received their vaccines can look forward to perks: the CDC announced new guidance this week stating that fully vaccinated people can gather indoors unmasked with others who have been vaccinated, and can also visit low-risk unvaccinated people from one other household indoors.