The Kremlin welcomed the move, saying the tech giants had conformed with 'the letter and spirit' of Russian law. 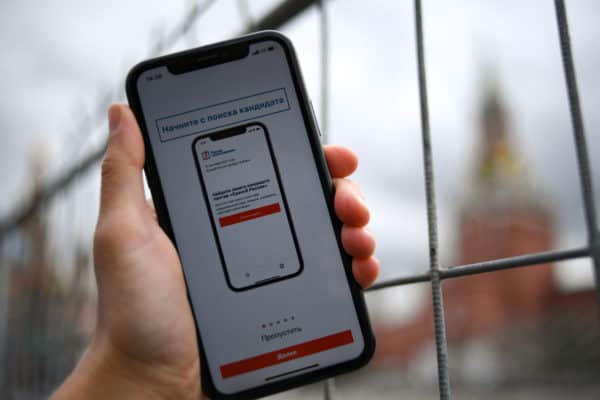 An illustration picture shows a smartphone screen displaying the "Smart Voting" - jailed Kremlin critic Alexei Navalny's app that aims to help Russians to vote out candidates from the ruling United Russia party in the upcoming polls, in Moscow on September 16, 2021. - President Vladimir Putin on September 16, 2021 urged Russians to vote in parliamentary polls this week in which most vocal Kremlin critics have been barred from running as part of an unprecedented crackdown. (Photo by NATALIA KOLESNIKOVA / AFP)

Allies of jailed Kremlin critic Alexei Navalny accused Apple and Google of “censorship” on Friday after they removed opposition voting apps at the start of a three-day parliamentary election in Russia.

Polls opened across the vast country on Friday after a year that saw a sweeping crackdown on President Vladimir Putin’s opponents, with Russians given the option of voting online.

State media showed Putin casting his ballot online from self-isolation, several days into quarantine after coming into contact with Covid.

As voting began on a cold Moscow morning, the opposition said a “Smart Voting” app advising supporters on how to vote out Kremlin allies had been removed from the app stores of both Apple and Google.

“They caved in to the Kremlin’s blackmail,” Leonid Volkov, an exiled aide to Navalny, said on Telegram, after Moscow accused the US tech giants of election interference and demanded they remove the app.

Navalny ally Ivan Zhdanov accused the companies of a “shameful act of political censorship”, posting a screenshot on Twitter of an email from Apple saying the app was removed because Navalny’s organisation has been declared “extremist”.

He said the US companies were making a “huge mistake.”

Google and Apple did not respond to an AFP request for comment, but the decision comes a day after their representatives met with Russian officials.

“After the conversation that was had, I think Google and Apple made the only right conclusion,” senator Andrei Klimov, who took part in the meeting, told Russian news agencies.

The Kremlin welcomed the move, saying the tech giants had conformed with “the letter and spirit” of Russian law.

The app instructed Russians on how to vote strategically to try to defeat politicians from Putin’s United Russia party, after candidates critical of the Kremlin were largely barred from running in the vote.

In power for two decades, Putin’s tenure has seen tightening controls over the Russian segment of the internet.

The election for seats in the lower house State Duma, which runs until Sunday, comes after a year that has seen Navalny jailed, many of his allies arrested and his organisations banned.

Putin, who turns 69 next month, said in a video on the eve of the vote that he was counting on voters to make “responsible, balanced and patriotic” decisions.

While he remains broadly well-liked, United Russia has seen its popularity drop as living standards decline in a pandemic-induced economic slump.

Russia has also struggled to contain the coronavirus, with even Putin in isolation this week after a major outbreak at the Kremlin.

In Navalny’s “Smart Voting” campaign this election, most of its voting list consists of Communist Party candidates.

Zhdanov said on Twitter that his team was considering suing Apple and Google, but for now was focusing on other ways of getting the list out.

He posted links to Google Docs with recommended candidates and Navalny’s team released a video on YouTube showing the names.

With the vote being held over three days, limited election observing and the option of voting electronically, critics say there will be few checks on the Kremlin party’s performance.

Voters were making their way to polling stations anyway.

“If we sit at home, nothing will change,” said 55-year-old Alexander Shirokov, who cast his ballot in the Far Eastern city of Vladivostok.

In Moscow, some voters waited hours to vote, with long queues forming outside central polling stations.

Some young voters in the capital told AFP they hoped new faces would be able to join the Duma.

Sergei Ryzhov, a construction worker, said that while the majority of Russians would vote for United Russia, “competition is needed”.

The Organization for Security and Co-operation in Europe — which often monitors elections across the ex-Soviet Union — said last month it would not be sending observers because of a limit on numbers imposed by Moscow.

Russian social media on Friday was filled with reports of ballot stuffing as well as polling stations filled with army servicemen.

The respected organisation Golos — that monitors elections and was branded a foreign agent on the eve of the vote — said authorities in the Urals region of Sverdlovsk were using QR codes to monitor if state employees were voting.

Widespread claims of fraud during parliamentary elections in 2011 sparked major demonstrations, but political observers were not expecting protests this time.

Besides United Russia, 13 more parties are running in the elections. Of the Duma’s 450 members, 225 are elected through party lists and the rest through single-member districts.