‘I am bracing for the worst’: Concern for chronically ill Palestinian teen held by Israel

'I am bracing for the worst,' said Amal Nakhleh's father. Amal suffers from myasthenia gravis, a rare chronic autoimmune, neuromuscular disease that causes muscle weakness, including in the muscles used for breathing. 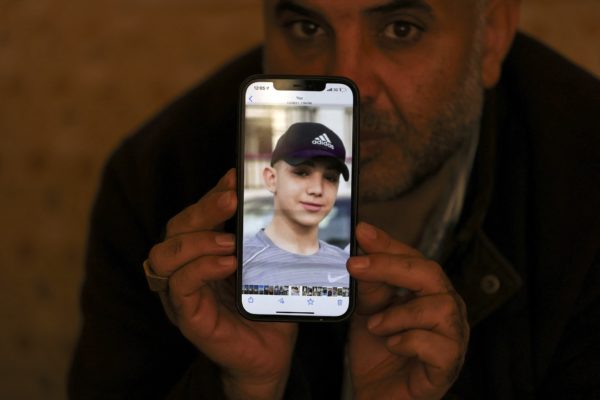 Palestinian teenager Amal Nakhleh’s first name means “hope” in Arabic, but his parents are in despair because he is chronically ill and one of the few minors held without charge by Israel.

“Since his arrest last year I have only seen him twice, including last week when he told me he wanted to go on hunger strike,” journalist Moammar Nakhleh said of his 17-year-old son.

“This scares me because he is already very weak,” from myasthenia, a rare neuromuscular disease, and underwent surgery in 2020 to have a tumour removed from his rib cage, Nakhleh said.

Nakhleh suffers from myasthenia gravis, a rare chronic autoimmune, neuromuscular disease that causes muscle weakness, including in the muscles used for breathing and swallowing.

Amal Nakhleh: What you need to know

Israeli authorities accuse Amal of throwing stones at soldiers and have held him for a year in administrative detention. The practice allows for suspects to be detained without charge for renewable six-month terms while investigations are ongoing.

Amal faces a new hearing Monday, and his father is worried that his detention could be renewed.

Administrative detention has been criticised by the Palestinians, human rights groups and foreign governments, who charge that Israel abuses it.

Deprivation of a person’s liberty

Israel defends the practice, saying that “due to the complex and volatile security situation in the West Bank, detention orders are issued against those who plan terrorist attacks.”

Orders are also issued for “those who orchestrate, facilitate or otherwise actively assist in the commission of such acts”. Israel argued in a foreign ministry statement:

“The use of administrative detentions, which allow for the deprivation of a person’s liberty for a limited time only, is an effective and lawful security measure against such continuous terrorist attacks”.

“It’s time for Israel to learn to forgo this undemocratic, corrupt practice of unlimited administrative detention, without evidence or charges that can be refuted,” Haaretz said.

The editorial highlighted the case of Hisham Abu Hawash, one of more than 450 Palestinians held for more than a year in administrative detention by Israel.

Six teenagers are among these prisoners, according to the Israeli human rights group Hamoked.

Tuesday’s editorial came as Abu Hawash, a 40-year-old member of the Islamic Jihad movement, ended a 141-day hunger strike after Israel agreed to his eventual release.

‘Where is the evidence?’

The deal proposed to Abu Hawash, a father of five, stipulates that his detention will not be extended beyond February 26, in return for his ending his fast.

“If the state had evidence against Abu Hawash, it should have charged him. If not, it had to release him immediately,” Haaretz said.

According to the paper, military prosecutors “had no unclassified evidence on which to draft an indictment to present to a military court” in the Abu Hawash case.

But for the Shin Bet domestic security agency, “‘confidential material’ is enough for a military commander to sign an order for six months of administrative detention, and an additional one six months later, repeat ad infinitum”.

So why was Amal arrested?

The Shin Bet declined to comment when asked by AFP but the agency has previously been quoted as saying that he was “suspected of having taken part in terrorist activity”.

Amal’s predicament dates back to November 2020 when he was arrested by Israeli authorities in the occupied West Bank.

A football fan, he was out with friends after recovering from his cancer surgery, his family said.

Accused of throwing stones at soldiers, Amal was held for 40 days but then set free by an Israeli judge.

“At the hearing, a representative of the security forces said they had a ‘file’ against him and would seek administrative detention,” Amal’s father recalled.

“The judge asked them to provide him with the incriminating file,” which they failed to, prompting the judge to free Amal.

But in January last year, he was re-arrested and placed in administrative detention, which has since been twice renewed.

The UN refugee agency UNRWA has taken up Amal’s case with the Israeli authorities.

“We are demanding his immediate release from administrative detention for two reasons: his medical condition which is incredibly serious… and he is a minor,” UNRWA’s West Bank chief, Gwyn Lewis, told AFP.

“We have written several times and followed up but there has never been any information on why he was arrested.”

Moammar Nakhleh fears that Amal’s detention will be renewed again on Monday.

“I’m bracing for the worst.”

“I am scared that if his detention is renewed, I will not see him for a long time,” he said at the family home in Al-Jalazun refugee camp.