Deane said the black hole was about 27 000 light years from earth and it appeared to have about the same size in the sky as a doughnut on the moon. 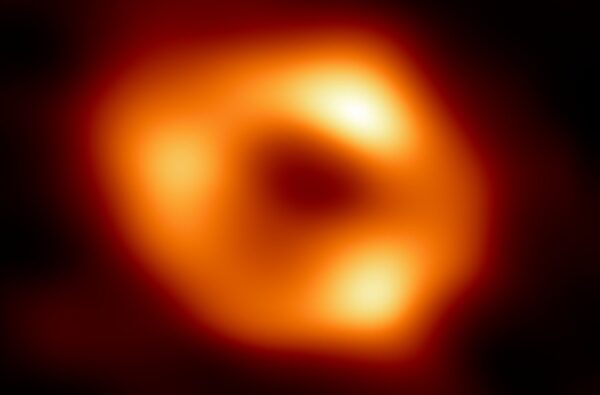 An international team of astronomers on 12 May 2022 unveiled the first image of a supermassive black hole – a cosmic body known as Sagittarius A. Photo: APF/European Southern Observatory

South African and international astronomers have revealed a jaw-dropping first image of the black hole at the heart of our galaxy.

This was showcased at the Witwatersrand Planetarium on Wednesday in one of five international press conferences carried out simultaneously in Munich, Washington DC, Santiago de Chile, Mexico City, Tokyo and Taipei.

The image was produced by a global research team called the Event Horizon Telescope (EHT) – more than 300 scientists around the globe who produced the first image of a black hole in another galaxy in 2019.

To produce the image, a worldwide network of radio telescopes was used. It revealed a bright ring-like structure with a dark central region defined as the black hole’s shadow. According to the scientists involved in the EHT project, the result provided overwhelming evidence the object was indeed a black hole and yielded valuable clues about the workings of such giants, which were thought to reside at the centre of most galaxies.

The image was a long-anticipated look at the massive object which sat at the very centre of our galaxy. Scientists had previously seen stars orbiting around something invisible, dense and massive at the centre of the Milky Way.

This had strongly suggested this object, known as Sagittarius A, was a black hole and the image provided the first direct visual evidence of it. It followed 10 days of rumours and conjecture about what exactly was going to be announced. EHT project scientist Geoffrey Bower from the Institute of Astronomy and Astrophysics (IAA) in Taipei said they were stunned by how well the size of the ring accords with Albert Einstein’s predictions.

Bower said although people cannot see the black hole itself, because it is completely dark and contained glowing gas around it, it revealed a “tell-tale signature” which was a dark central region called a “shadow”, surrounded by a bright ring-like structure. He said the new view captured light bent by the powerful gravity of the black hole, which was four million times more massive than the sun.

“These unprecedented observations have greatly improved our understanding of what happens at the very centre of our galaxy and offer new insights on how these giant black holes interact with their surroundings.”

Deane said the black hole was about 27 000 light years from earth and it appeared to have about the same size in the sky as a doughnut on the moon. To image it, the team created the powerful EHT, which linked together eight existing radio observatories across the planet to form a single “earth-sized” virtual telescope.

Sera Markoff, co-chair of the EHT science council, said the two black holes looked remarkably similar, even though the galaxy’s black hole was more than a thousand times smaller and less massive than M87. The release of the first image of a black hole was called the M87*.

“We have two completely different types of galaxies and two very different black hole masses, but close to the edge of these black holes they look amazingly similar,” she said.

“This tells us that general relativity governs these objects up close and any differences we see further away must be due to differences in the material that surrounds the black holes.”

Scientists were particularly excited to have images of two black holes of very different sizes. EHT scientist Keiichi Asada from IAA said they were able to study the differences between these two massive black holes.

“We have images for two black holes, one at the large end and one at the small end of super massive black holes in the universe and we can go a lot further in testing how gravity behaves in these extreme environments than ever before,” he said.