On March 3, 2020, a powerful magnitude 7.4 quake hits the north of the country, killing between 70 and 150 people in Samangan province. 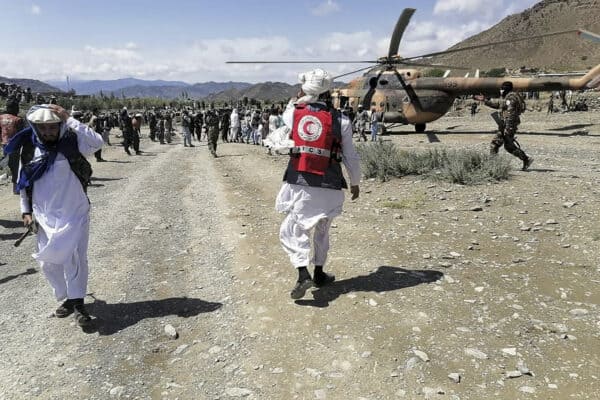 This photograph taken on June 22, 2022 and received as a courtesy of the Afghan government-run Bakhtar News Agency shows soldiers and Afghan Red Crescent Society officials near a helicopter at an earthquake hit area in Afghanistan's Gayan district, Paktika province. - A powerful earthquake struck a remote border region of Afghanistan overnight killing at least 920 people and injuring hundreds more, officials said on June 22, with the toll expected to rise as rescuers dig through collapsed dwellings. (Photo by Bakhtar News Agency / AFP) / XGTY / EDITORS NOTE --- RESTRICTED TO EDITORIAL USE - MANDATORY CREDIT "AFP PHOTO /Bakhtar News Agency " - NO MARKETING - NO ADVERTISING CAMPAIGNS - DISTRIBUTED AS A SERVICE TO CLIENTS - NO ARCHIVE

The earthquake that killed at least 1,000 people in eastern Afghanistan and injured hundreds more is the deadliest in the country in nearly a quarter of a century.

Here is an overview of other recent quakes in one of the world’s poorest countries.

On February 1, 1991, a magnitude 6.9 quake rocks Afghanistan and the north-east of neighbouring Pakistan.

The tremors are also felt in northern India and Tajikistan.

At least 1,500 people are killed, according to Afghan authorities.

In 1998, the country is rocked by two major quakes.

The first on February 4, 1998, is centred on the north-eastern province of Takhar, where around 4,500 people are killed and thousands left homeless. The quake has a magnitude of 5.9, according to the US Geological Survey.

The second, magnitude 6.6, also hits Takhar, along with the far north-eastern province of Badakhshan on May 30. It leaves around 5,000 people dead, 1,500 wounded and destroys several villages.

On March 3, 2020, a powerful magnitude 7.4 quake hits the north of the country, killing between 70 and 150 people in Samangan province.

On March 25, a smaller quake kills over 800 people and leaves thousands homeless in Baghlan province in the foothills of the Hindu Kush range. The town of Nahrin, which had a population of 20,000 people, is completely destroyed.

On June 11, 2012, three quakes ranging in magnitude from 5.2 to 5.7 leave 75 dead and destroy scores of homes in Baghlan province. All but four of the dead are in the village of Mullah Jan which is buried by a landslide.

On October 26, 2015, the biggest quake in decades with a magnitude of 7.5 rocks the Hindu Kush range, which straddles the Afghanistan-Pakistan border. At least 380 people are killed in the two countries.