What people on Twitter are saying about Mugabe’s resignation

Mugabe has resigned during a parliamentary seating which was tabled to remove him as president of Zimbabwe. 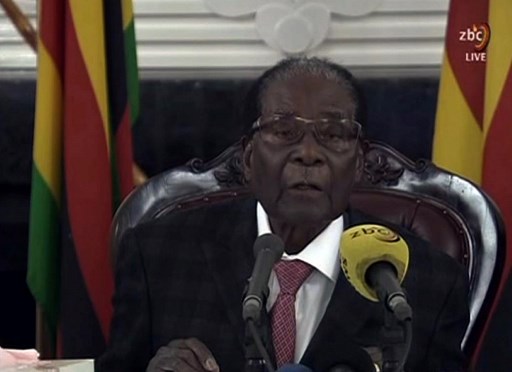 A video grab made on November 19, 2017 from footage of the broadcast of Zimbabwe Broadcasting corporation (ZBC) shows Zimbabwe's President Robert Mugabe delivering a speech in Harare, following a meeting with army chiefs who have seized power in Zimbabwe. Zimbabwean President Robert Mugabe, in a much-expected TV address, stressed he was still in power after his authoritarian 37-year reign was rocked by a military takeover. Many Zimbabweans expected Mugabe to resign after the army seized power last week. But Mugabe delivered his speech alongside the uniformed generals who were behind the military intervention. In his address, Mugabe made no reference to the clamour for him to resign. / AFP PHOTO / ZBC AND AFP PHOTO / STR / XGTY / RESTRICTED TO EDITORIAL USE - MANDATORY CREDIT "AFP PHOTO / ZBC" - NO MARKETING NO ADVERTISING CAMPAIGNS - DISTRIBUTED AS A SERVICE TO CLIENTS

The parliamentary speaker has confirmed that Mugabe who has led Zimbabwe for 30 years and was the leader of Zanu-PF for 37 has finally stepped down.

🇿🇼 Zimbabweans celebrate in the streets of Harare 🇿🇼#MugabeResigns pic.twitter.com/U5fh0QvLkJ

Jubilation on the streets of Zimbabwe as thousands turn out to celebrate Robert Mugabe’s resignation. #MugabeResigns #Zimbabwe pic.twitter.com/X2ETQv08bk

🇿🇼 A group of ecstatic Zimbabweans chanting “rest in peace, rest in peace” outside the rainbow towers where the Parliamentarians met earlier#MugabeResigns pic.twitter.com/HDI6TchwEe

The happiness here is infectious. Even tourist at Holiday Inn are celebrating.
Zimbabwe has exploded. The streets are crazy.#MugabeResigns @TheStar_news @ReporterStar pic.twitter.com/rW7bRic8EQ

#MugabeResigns some of us had friends from Zimbabwe it will be painful to see them leave but its a good thing. pic.twitter.com/mEBkly7eNr

Border gates tomorrow lines…..
When people they are moving back to Zimbabwe….🔥 pic.twitter.com/Sq4ZtF0EBa