Plague outbreak in Madagascar revived dread of a killer

Most inhabitants of Madagascar thought the plague was a footnote of medical history until the disease dramatically returned last year, slaying more than 200 people.

Fear and anxiety rippled across the Indian Ocean island nation.

“People were afraid to come to hospital — they were afraid of catching the plague,” recalled Professor Mamy Randria, head of the infectious diseases service at a hospital in the capital Antananarivo.

Randria found himself on the front line of an urban war against the disease, which shook his own medical personnel when they realised what they were up against.

“They were terrified by the reputation of the plague. It kills very fast and it is very contagious,” he said.

Many families of plague victims complained of discrimination, while medical staff were tainted with suspicion by association with the sickness.

“Doctors treating the plague were forced by their wife or partner to sleep in separate beds,” Randria said.

In the “Black Death” pandemic that swept through Europe in the 14th century, as much as a third of the population were wiped out by the plague.

Today, thanks to diagnostic tests, tried-and-trusted containment procedures, simple rules of hygiene and an arsenal of antibiotics, the disease is no longer a mass killer.

Even so, it remains an endemic threat in a number of African countries that are among the poorest on the planet, including Madagascar.

The bacteria that causes the plague, Yersinia pestis, is transported by rats and transmitted to human beings by their fleas.

In Madagascar, it tends to make a comeback each hot rainy season, from September to April. On average, between 300 and 600 infections are recorded every year among a population approaching 25 million people, according to a UN estimate.

The 2017 season, though, proved to be exceptional.

Cases sprang up far earlier than usual and instead of being confined to the countryside, the disease infiltrated towns. The authorities recorded 2,384 cases, leading to 202 deaths.

Most fatalities came from the pneumonic form of plague, which infects the lungs — the rarest but most virulent form of the disease.

The announcement of the first cases in highland Antananarivo and the large eastern seaport of Toamasina caused a major scare. Residents of the capital swarmed to pharmacies to acquire thermometers, face-masks and antibiotics.

After the initial shock, local authorities reacted swiftly, strongly supported by the World Health Organization (WHO) and humanitarian organisations, in implementing a simple but effective strategy.

The government closed schools and universities for disinfection, cleaned up refuse-strewn markets and erected public health checkpoints on the roads into affected towns.

Above all, it launched a major public information campaign for a population that was often incredulous at the urban outbreak of a disease from another era.

One Antananarivo mother, who asked not to be identified, saw her six-year-old daughter die — but she refuses to believe the health authorities, who blame the plague.

“My daughter was tired after the burial of her grandfather. Then she had a high fever that caused her death because of delays in treatment,” she said.

“The government said it was pulmonary plague and forbade her burial in the family tomb as tradition dictates,” she complained.

The outbreak has revived arguments over ancestral practices that many blame for spreading the disease.

Critics say the main culprit is the ceremony of “Famadihana” or the “turning of the bones”, in which families honour their ancestors by unearthing corpses, giving them fresh shrouds and dancing with them before reburial. 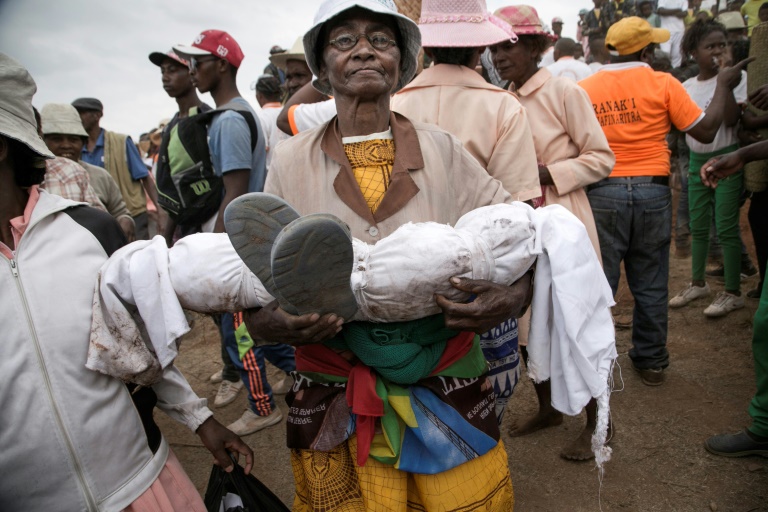 Isabel Malala Razafindrakoto carries the wrapped body of her son, who died aged just three years old, in the ritual of Famadihana

Such rituals challenge the basic rules of hygiene and the authorities have cautiously warned of the risk. These appeals are widely ignored.

“I have taken part in the Famadihana for 82 years and I have never known anybody who caught the plague after touching a corpse,” said Maximilienne Ranarivelo, an Antananarivo resident with much experience of the ritual.

Other explanations have been offered for the plague’s comeback. Deforestation, for example, is held to have driven rodents that carry plague fleas out of their natural habitat towards towns.

But lack of medical infrastructure in many parts of the country also gets the blame.

“Madagascar could get rid of plague epidemics once and for all by making strategic investments in its health system,” WHO Director General Tedros Adhanom Ghebreyesus has said.